Can you solve the Dauphin County "Ring of Trees" mystery? 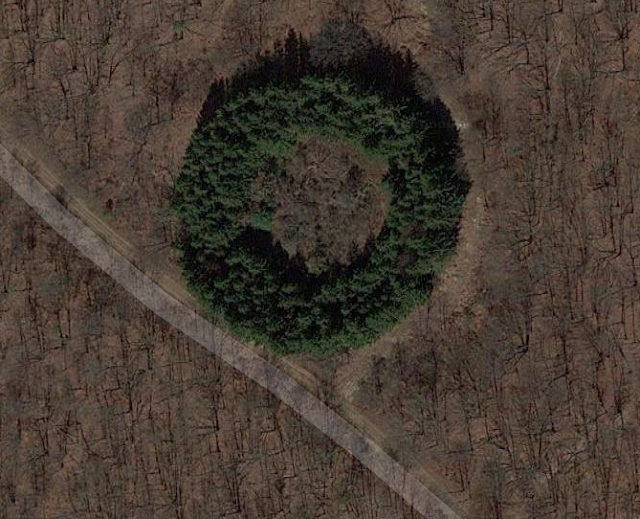 Clark's Valley in Dauphin County contains some of the most stunning natural scenery in all of Pennsylvania, making it a popular destination for anglers, hunters, hikers and outdoors enthusiasts. Sandwiched between Clark's Valley Road (Rt. 325) and Williamstown lies the eastern tip of Jefferson Township. This area of pristine, rugged wilderness features large swaths of Weiser State Forest and State Gamelands #210, and is traversed by Greenland Road. This mostly unpaved road extends from Powells Valley Road in Dauphin County all the way to Porter Township in Schuylkill County, emerging from the hilly wilderness in the vicinity of Bendigo Airport.

Numerous dirt roads and trails intersect Greenland Road, and there are probably hundreds of outdoorsmen who know each path and trail like the palms of their own hands. Hopefully one of them might be able to solve a peculiar modern mystery. It is a mystery that probably has a most mundane explanation, but it is still a mystery nonetheless (it's got me baffled, at least).

You see, this mystery can only be observed from the air... and only during the deepest depths of winter.

As you can see, based upon this satellite image from Google Maps (the sparseness of the surrounding area indicates that the photographs were taken in either fall or winter), there appears to be at least 3 distinct rings made of evergreen trees deep in the wilderness of Jefferson Township. Since these rings are surrounded by heavy forest, they virtually disappear in the spring and summer, camouflaged by the surrounding trees and brush. 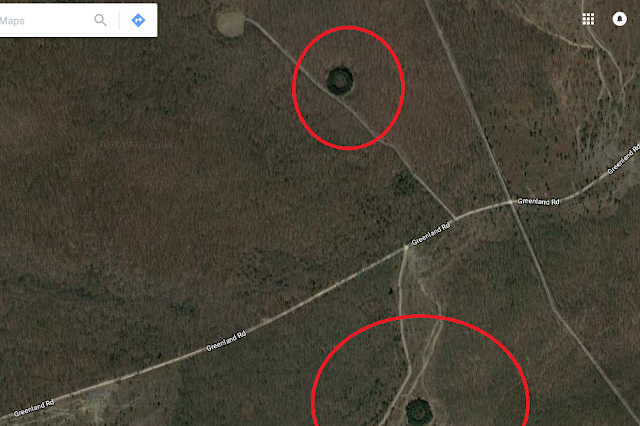 These giant "wreaths" appear to be a modern creation; I've scoured my library of historic aerial photographs and haven't seen any evidence of them existing prior to the 1970s. Of course, all of the aerial photos were taken in the winter, and since most are in black and white, it's difficult to draw and conclusions. However, the Bing Maps pictures (which are more recent than Google's) show a third mystery ring, which only appears to be partially formed on Google Maps, which leads me to believe these creations are fairly recent. 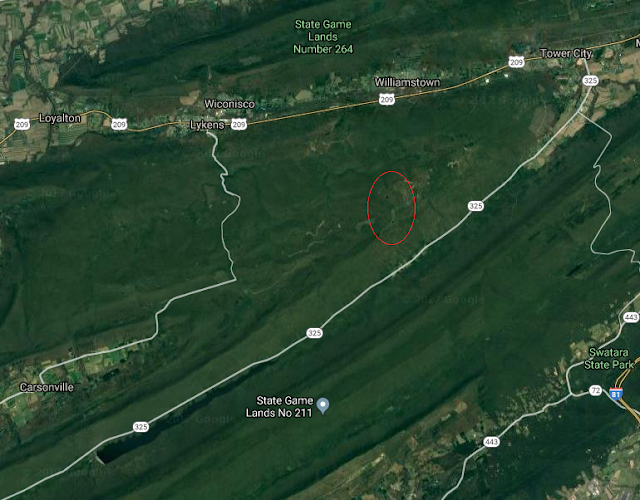 Obviously these rings were made to be seen from the air, perhaps as some sort of navigational aid; there are cellular towers in the vicinity, as well as the minuscule Bendigo Airport, but why would anyone construct an aerial marker that can only been seen a few months out of the year?

Or could these rings have been created by game wardens and forestry officials for some purpose pertaining to wildlife conservation? Deer habitats maybe?

These mystery tree rings, of course, bring to mind the famous "forest swastika" of Brandenburg, Germany, where larch trees were strategically planted in order to create a Nazi symbol that emerged for a few weeks every fall. German authorities attempted to destroy the trees in 2000 and, to this day, nobody knows who planted them. 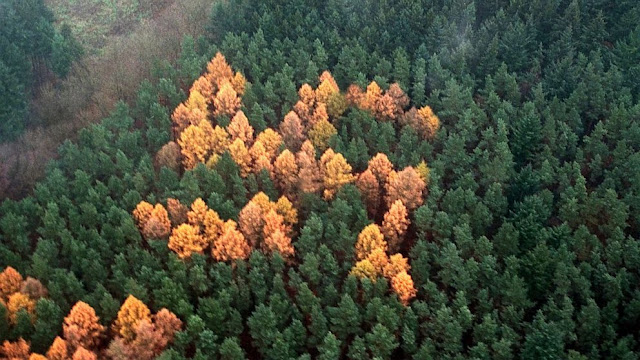 But I'm confident that someone out there knows who planted the evergreen rings in Dauphin County. So if you have more information about these rings, or theories about who created them and why, feel free to leave a comment in the comment section. I am looking forward to reading them!