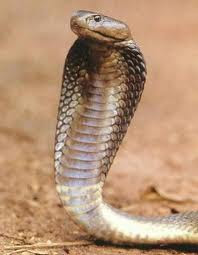 An 11 foot long snake with ears?  According to this story, which appeared in the October 1, 1875 edition of the Reading Eagle, a farmer killed such a snake and had it stuffed.  Could the hood of a cobra have been mistaken for "ears"?  The average length of a king cobra is around 12 feet, so that may be a possibility, although it begs the question:  Just how the heck did a cobra get loose in rural Pennsylvania?


A large snake, supposed to be of the swamp species, was killed on Saturday afternoon last, about one mile and a half from Beckersville, this county, by Elhannon Hauser.  Mr. Hauser was out on a hill cutting wood when a boy named Garman told him that in the road just below, a large snake was lying.  Mr. Hauser left his work and went to the place and the snake did not move, when he struck it with a stick and killed it.  It measured 11 feet 4 inches.  The most surprising thing is that it had two well developed ears on its head, two and a half inches long.  It was skinned and will be stuffed.  Mr. Hauser thinks he will take it to the Centennial.