A Cat's Funeral and a Philadelphia Mystery

In April of 1882, a crowd of mourners gathered in Philadelphia to pay their last respects to one of the city's most beloved citizens. However, the dearly departed was neither a man, woman, nor child-- but a cat. Tom, the furry feline celebrity, was laid out in a handsome coffin and buried in the dirt cellar of the Howland & Co. department store on Market Street.

Today, the spot where Howland & Co. once stood is remembered by Philly residents as the site of the historic Bond Hotel, which was demolished in 1990. It was first called the Vendig Hotel at the time of its completion in 1893, and served as the depot hotel for the Reading Terminal, with its main entrance facing Filbert St. 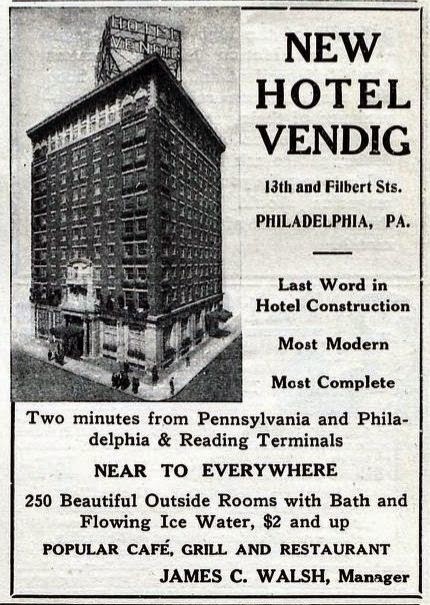 Unfortunately, records of the era do not mention whatever became of Tom's remains when the Howland & Co. store was torn down to make way for the new hotel. Surely, construction workers would've been surprised to discover a coffin while digging the foundation for the hotel. Whatever happened to Tom? Was he re-interred someplace else? Did he end up in a pile of rubbish in a landfill? Or is his coffin still buried beneath the modern buildings which loom over 13th and Market Streets? The final resting place of Tom the Cat may be the least known Philadelphia mystery, but it may also be the most intriguing.

While so many things remain unknown, here's what we do know.

From the April 17, 1882 edition of the Lancaster Intelligencer:

People who passed the large store of Howland & Co., at 1203 Market Street last evening, were surprised to see it closed much earlier than usual and a badge of deep mourning hanging from the knob of the front door. Those who were acquainted with the firm knew that none of the members had been sick and were therefore amazed to see the crepe at the door.

It was learned, however, upon inquiry, that the deceased was not a member of the firm, nor a clerk, nor an errand boy, but was a large Thomas cat. The cat had been a great favorite not only with those in the store but with the customers who daily frequent the place. It had been taught to do almost everything but talk, and it is even claimed that it could talk, not in the usual way, but with its eyes, making known its wants very easily by the intelligent expressions in them. All the neighboring merchants knew "Tom", for although six months old, he was of immense size and had a coat of fur as soft, smooth and beautiful as sealskin.

Of late, however, "Tom" had become enamored of a comely Mariah cat living in the neighborhood and took frequent strolls with her over back sheds and roofs whenever he could get out at night. On Thursday evening, evading the eyes of those in the store, "Tom" started out to spend the evening with his enamorata and to take what proved to be a fatal walk. Instead of perambulating the roofs, as usual, the two decided to see the sights along Market Street. Side by side, with an occasional affectionate me-ow, they walked up and down Market Street until nearly morning, "Tom" valiantly keeping off the many intruders who were desirous of winning a favorable glance from his love. During a slight difficulty which arose during a discussion with a brother feline, Tom was run over by a passing wagon and was found dead in the morning by some of the store hands.

There was great mourning in the store over the death of "Tom". His body was taken to an icehouse, where it found a temporary resting place. A handsome coffin was made, covered with black cloth and adorned with four heavy nickel-plated handles on each side. The remains were placed in this and laid out in state in the back of the store. The body was viewed by a large number of persons. It rested naturally, with its head on a pillow of flowers and floral tributes surrounding it on all sides. The front paws were crossed over his breast and the back ones bent up to his side.

The funeral in the evening was all pomp and ceremony. The little coffin was borne down the cellar steps to the Dead March, whistled by a quartet of mourners. Fully twenty-five people watched the earth fall on the flowers on the coffin lid, which was inscribed on a nickel plate, "Sacred to the memory of Tom; died April 14, 1882, aged 6 months." A stone with a suitable inscription will be placed over the grave.