Death of an Aviatrix 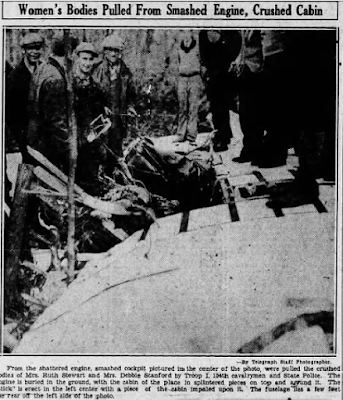 The mountains of Pennsylvania have been called an aviator's graveyard since the earliest days of flight. One of the great tragedies of Pennsylvania aviation history occurred in Perry County, in January of 1932, when a plane piloted by two daring young women with hopes of setting a world record, crashed into the side of Bower's Mountain, near the site of present-day Colonel Denning State Park.

On Tuesday, January 5, the plane being flown by Ruth Stewart, of St. Louis, disappeared into a cloud bank, seemingly without a trace. With her was a passenger from Toronto, Debbie Stanford. The two female pilots were en route to New York, where they planned to refuel and attempt a one-stop flight to Buenos Aires, in the hopes of setting a new world record. Stewart and Stanford were following a plane piloted by Stewart's parents, Mr. and Mrs. William Woerner of St. Louis. The aircraft remained lost for two days, until its wreckage was spotted from the air by volunteer flyers. The wreckage was buried in the north ridge of Bowers Mountain, near Center Square, a few hundred feet from the fire tower road, adjacent to the Laurel Run picnic grounds.

A patrol from Troop G the 104th Cavalry, based out of Carlisle, was immediately dispatched to the rugged wilderness to recover the bodies.

This proved a difficult task; the plane had struck the side of Bowers Mountains with such force that its engine was buried in the rocks, the fuselage was a crumpled mess. One of the plane's wings had to be cut off in order to recover the body of Ruth Stewart, whose clothing was soaked with gasoline-- an indication that she had attempted to prevent an explosion by cutting the switch.

Sgt. Edgar Dapp, along with a detachment of men from his 104th Cavalry, was the first to arrive at the crash site. They were accompanied by Trooper John Wilson of the State Police. The group had to cut away and remove a number of fallen trees in order to get to the wreckage.

It was J. Paul Lukens, a pilot from Philadelphia, who spotted the wreckage from his autogyro. The search party consisted of Lukens, William Moore, from the Harrisburg Airport, and local pilots N.S. Rider and Gentry Shelton. Shelton flew in a low circle near the crash site and reported that Stewart had been crushed by the engine, while Stanford had been killed against the side of the cockpit. Both deaths, he surmised, had to have been instantaneous.

William Moore believed that the women grazed the top of a tree on a nearby mountain and lost control of the plane. "I was flying along the top of the ridge when I saw tree tops mowed off like grass. Mrs. Stewart must have been up just as high as the mountain. When she came over the top she barely hit the trees, lost control of her ship and it pancaked into the ground on the side.  She was flying in the fog when she became separated from the plane accompanying her. She must have been bewildered, for she had turned clear around and was heading west again."

The bodies were recovered and transported by State Police to the Blain Hotel, where they resided temporarily until the arrival of the county coroner, Dr. J.E. Book. The remains were then transported to Harrisburg, and it was decided that Gentry Shelton would be tasked with the difficult job of notifying the parents of the deceased pilots. Shelton phoned the parents of Ruth Stewart and informed them that their daughter's body was being taken to Harrisburg, but he implored them not to view the remains-- the carnage was too horrific. According to a Harrisburg Telegraph reporter, Stewart's head was crushed and her body badly mangled. The lower portion of Stanford's body was also badly crushed. 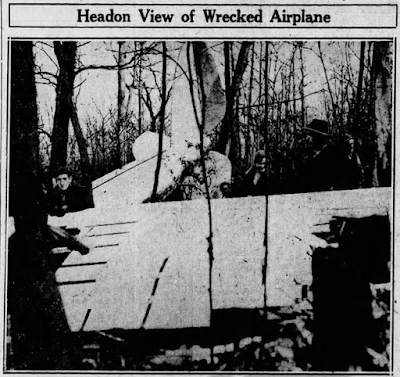 "I can't believe it. It can't be true," sobbed Ruth Stewart's mother, Mrs. William Woerner, upon hearing the news in Harrisburg. "The worst of it, " she said, "Ruth didn't want to make the trip. Even after she was in her plane and it was all warmed up ready to start she told me, 'Really, mother, I don't like to take off in this weather. Why can't we wait until it clear up?' But she was persuaded to fly by the other flyers to try it at any rate, with the warning to keep close behind and everything would be all right."

Mrs. Woerner flew with her daughter in the plane as far as Terre Haute, Indiana, where they traded places and Ruth took over the controls of the Lockheed and picked up the passenger, Debbie Stanford. "If I had only stayed with her," sobbed the bewildered mother, "I wish I had been with her when she crashed."

Sergeant Dapp said of the recovery mission: "We dragged the fuselage of the plane away from the wing section and lifted it to one side so that we could free the bodies. Both of them were soaked with gasoline and apparently Mrs. Stewart cut the switch to prevent an explosion when she saw that they were about to crash, for there was no evidence of any fire."

Dapp and his men recovered the baggage and other valuables and turned them over to the State Police and then carried the crushed and broken bodies to a truck. The National Guardsmen who assisted in the recovery efforts were Dapp, Sgt. Ed Schreadley, Sgt. Leeds, Cpl. Knisely and Privates C.P. Walters, Eugene Mackley, Harry Trout, Roy Rock, Ralph Craver, Jack Perrigo and James Kautz. Four of these men accompanied the bodies to Landisburg and then to Blain, where the remains awaited inspection by the coroner.

Ruth Stewart was just 26 when her plane went down. She was the first female from St. Louis to earn a pilot's license. Stewart had also competed in two national level air races, finishing in fifth place in her final race from Los Angeles to Cleveland.

Shortly after 11 o'clock on January 7 a plane from the State Aeronautics Commission, piloted by Inspector Richard G. Herbine, flew over the crash site to begin his formal investigation. Upon examining the wreckage, Herbine stated that "Either Mrs. Stewart got confused in flying blind, or else she was trying to feel her way out of it [the fog] and struck the top of the mountain. My belief is that it was the former."

The mountains and hills of Pennsylvania claimed the lives of more pilots in the early days of aviation than any other location in the United States. By the time of the Perry County plane crash of 1932, Stewart and Stanford were the 26th and 27th victims of Pennsylvania's deceptively dangerous fog-shrouded mountains. As of 1932, other victims included 12 air mail pilots, two army pilots who crashed near Gettysburg, and 11 others who were killed in crashes in the vicinity of the Middletown Army Air Depot.


Did you enjoy this article? If so, then pick up a paperback copy of Pennsylvania Oddities, which features even more true stories of the strange from around the Keystone State, as well as more in-depth versions of some of the more spectacular stories shown on this blog. Only $14.95 and free shipping is available!
Labels: Perry County plane crashes