The Aeronaut's Fate: The Story of Wash Donaldson 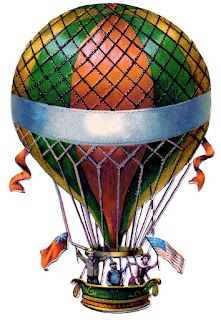 Norwegian fishermen plying the icy waters in one of the narrow, rocky gorges of the remote island of Lofoten found human remains wedged among the rocks one mid-October day in 1901. There was no way to identify the body; the clothing had been ripped away, and all that remained was a gold ring on the left hand, engraved "Wash D." The mysterious discovery of the mysterious body wearing a ring with a mysterious inscription, in such a remote region of the world, aroused much curiosity-- but not enough to solve the riddle. The man's remains were buried in a tiny Norwegian churchyard overlooking the vast expanse of the great North Sea.

When the reports of the discovery crossed the Atlantic, it was determined that the remains were those of Wash Donaldson, a Harrisburg native who, at one time, was the most famous aeronaut in America. According to reports, Donaldson was last seen four months earlier, in a balloon over the Scottish city of Montrose.

This is the story of famed balloonist Wash Donaldson, and how he came to be buried thousands of miles away from home, in a graveyard north of the Arctic Circle.


It was the summer of 1875, and Barnum and Bailey's great circus appeared in Chicago for a one week engagement. Colorful posters were plastered throughout the city, but it was neither lions, elephants or acrobats who received top billing. That summer, the greatest draw for Barnum and Bailey was Wash Donaldson, the famed aeronaut, who made daily ascensions into the clouds while thousands on the ground craned their necks upward in slack-jawed amazement and awe.

And it was nearly impossible not to be awed by Wash Donaldson. He had a fine physique and was an athlete of the first order, and he possessed matinee idol looks before there was such a thing as motion pictures. Boys and men wanted to be like him; girls and women wanted to be with him.

The day's first ascension was a success. Four persons were in the basket and Wash charmed and chatted with the priveleged passengers as the balloon rose towards the clouds. They ascended a mile or more, and then Wash returned them safely. By this time the passengers were shocked out of their skins-- not many people in those days had ever looked down upon the earth from a mile above-- but Wash was as cool and dapper as if he had been enjoying  a morning stroll through a dewy meadow. It was this debonair attitude that made Wash Donaldson an American hero. A quarter of a century later, it was the same cavalier spirit that would send him crashing to his death.

Later that evening somebody asked Wash what would happen if it ever became necessary to unload the balloon's basket in order to save his own life. Wash explained that man's instinct for self-preservation was exactly the same in air as it was on the ground. Everybody gasped at the comment.

With the circus that day was a beautiful young woman who suddenly found herself very much in love with the dashing aeronaut. She would eventually become his wife, and he promised his betrothed that after they were married he would make no more ascensions in his colorful balloon. It was this same woman, just a girl at the time, who exclaimed:

"What! Would you throw a man out of the basket to save your own life?"

Wash clung to his position, and couldn't quite understand why everybody around him suddenly appeared to have ice water running through their veins.

The following day a large crowd had gathered to watch Wash Donaldson's ascension, but not nearly as many people volunteered to go up with him as had the volunteered the day before. He made the ascension with only one passenger, a reporter by the name of Grimwood. The clouds darkened and thunder roared across the choppy waters of Lake Michigan, but the ascension proceeded as planned. Low clouds soon obscured the sight of the balloon from the ground, but when the clouds cleared the balloon was nowhere to be seen.

As night fell, telegrams were sent by the circus to towns and cities and all points around the lake. But morning came without word of Wash Donaldson as his passenger. No one had seen the balloon. The week soon ended and the circus left town and still no word from Wash. Rumor had it that the balloon had been spotted sweeping over Lake Michigan with a man hanging from the basket, head downward. Hungry birds pecked at the body. Another rumor circulated that a deflated balloon had been seen floating in the lake near Mackinac. Both stories proved to be false. A third rumor had it that Wash had been seen in London, while other said South Africa, but by this time nobody was willing to believe anything they heard about the dashing young aeronaut and his lost balloon.

About four months after the fateful ascension there was found on the Michigan shoreline, neary Stony Creek, the remains of a human body, busted and broken beyond recognition. The body was naked, except for a ring on the finger of the deceased. The ring was identified by a woman in Chicago, who claimed that she had given it to Grimwood just before he took off in the balloon as a talisman of good fortune.

Time passed on and the mystery of Wash Donaldson's disappearance was forgotten. A number of years later an American newspaperman was traveling through the Highlands of Scotland and stopped at the ancient town of Montrose on the northeastern coast. It was a special day for the city and later that afternoon there was to be a great balloon ascension. Farmers, businessmen and politicians alike flocked to the ancient town to witness the spectacle. A Pittsburgh reporter named Richard Dobson pressed through the large crowd and reached the ropes anchoring the balloon, which was ready to take flight. Three men entered the basket, the ropes were cut and the balloon sailed up into the clouds. But the reporter was left with a strange feeling, like he had seen those three men before. Or at least one of them. He desperately tried to connect the face of the aeronaut with a name. Oh, what was his name? wondered Dobson. Ah! Suddenly the name came to him. Wash Donaldson!

The reporter and his traveling companions waited for the balloon to land, and then they approached the aeronaut.

"Hello, Wash," Dobson said. "We thought that you were at the bottom of Lake Michigan. Where is young Grimwood?"

The still-handsome face of the famous balloonist turned deathly pale. "You are mistaken, I think," he replied. "I do not know you, nor what you are talking about."

But the reporter pushed on.

"You are the long-lost Donaldson! We always supposed that you had made your last trip to the clouds." At this, Wash Donaldson gave a cynical smile and barked out an order-- "Cut clear!" The magnificent balloon arose. "I am making you see one more!" he laughed, as the balloon gained altitude and disappeared from view over the great North Sea.

Wash Donaldson made a name for himself as a resident of Harrisburg, making frequent balloon ascensions from Market Square. He first arrived in the city in the fall of 1864, having an engagement as an acrobat at a local theatre. He eventually moved to Reading, where he resided until his "disappearance". The woman he married remained in Reading, and claimed that Wash never made any effort to contact her after his ill-fated ascension over Lake Michigan. Donaldson was skewered by newspapers; many reporters believed that he had indeed thrown Grimwood out of the basket in order to save his own life. Donaldson's friends in Harrisburg-- of which there were many-- refuted this allegations passionately. A few weeks after Wash Donaldson was buried in Norway, the Harrisburg Telegraph defended the reputation of the controversial aeronaut, writing:  "Donaldson was a lion-hearted, fearless man, and yet as gentle as a woman, and his many friends in Harrisburg well knew. he would be the last man in the world to sacrifice a life to save his own, but would rather make desperate endeavor to save both lives, failing in which he would be the first to make the sacrifice."