More on the Mystery of New Castle's Murder Marsh 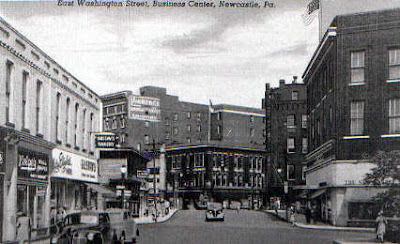 In Lawrence County's Taylor Township, west of the Beaver and Pennsylvania Railroad yards and east of the Pittsburgh, Lake Erie & Baltimore yards just south of New Castle, was a putrid, stagnant swamp known as the Murder Marsh, so named because, in the fall of 1925, it was the site of a gruesome find-- two headless male bodies and the skull of a female.

To this day, the mystery of the murder marsh has never been solved. The killer or killers have never been brought to justice and the unfortunate victims have never been positively identified. Much of this can be attributed to the laziness and apathy of local law enforcement; police closed the case on October 24, 1925-- just four days after the last body was found. Calling the case "unsolvable", they claimed the number of volunteers needed to scour the swap was too small, and that the bog was too deep and dangerous.

The facts seem to point to organized crime; the murder marsh was used as a dumping ground over a period of many years. But even in the following years, with more gruesome discoveries made in the vicinity of the swamp, the case was never re-opened: In March of 1929, the body of a railroad worker named Tony Rossi was found near the headwaters of the swamp with his skull bashed in. In October of 1934, another body was found in the swamp, only a few hundred yards away from where the three decapitated bodies were discovered nine years earlier. The body was that of a brown-haired man about six feet tall who was never identified. He was buried completely nude, facedown in a shallow grave, indicating foul play.

These deaths, which I first wrote about in July of 2015, only tell a few paragraphs of a story that has never been completely written. I've received many emails from readers since my original blog post, offering various leads and theories, and passing along additional information about this spectacular unsolved Pennsylvania mystery. Today's post highlights more fascinating stories about New Castle's "Murder Marsh".

In October of 1939 (funny how these victims always turn up in October, isn't it?) another headless body was found in the swamp. It was the body of a girl, decapitated and burned. The following story appeared in The Daily Republican on October 14. 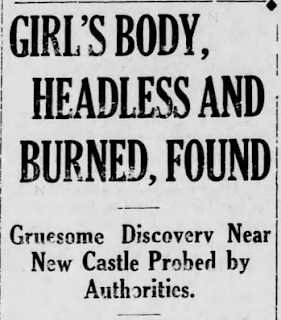 New Castle, Pa., Oct. 14-- Discovery of the headless, charred body of a girl, about 17, today focused attention of state and county police authorities on "Murder Swamp", a desolate, forbidding area about seven miles from here.

The gruesome discovery was made late yesterday by a group of boys gathering nuts. Their discovery touched off a two-sided investigation in an effort to learn the identity of the girl and her slayer.
Coroner Charles Piper Byers of Lawrence County said that the girl had been dead at least two weeks. Her head, he said, had been hacked off in a rough manner and the body apparently had been set afire. The head could not be found.

Byers said the body was badly charred. When found, it was surrounded by a pile of burned paper which apparently had been wrapped about the torso and set ablaze. There was no clothing or other clues which might lead to identity of the girl.

Badly decomposed, the remains were found in a clump of weeds and brush not far from the tracks of the Pittsburgh and Lake Erie Railroad, which run across the only firm land in the vicinity.

Byers said there were no other marks of violence on the body, adding that it was not determined whether the girl had been the victim of a degenerate.*

(Note: This description often appeared in pre-WW2 newspapers to indicate a rapist, as journalists of the era were prohibited from using words such as rape, prostitution, pregnant, abortion, etc.)

Although some authorities noted that the condition of the body was similar to that of victims of Cleveland's "Mad Butcher of Kingsbury Run", Byers remarked that such a theory was "merely a supposition". It was pointed out that the Butcher's victims were cut up expertly, whereas the head of the girl found yesterday was severed in an amateur-like manner.

Cleveland's "Butcher" has been blamed for the slaying of at least six persons, whose headless bodies were found on Cleveland dumps during the past six years.

"Murder Swamp" acquired its name years ago when six torsos and five skulls were found there, police reported.


The victim's head was found on October 19, inside an empty gondola car of the Pittsburgh and Lake Erie Railroad.

The "Mad Butcher" theory seemed to be the favorite explanation of police. When yet another headless body was found in the swamp in November of 1940, police asserted that the killer was indeed the infamous Mad Butcher of Cleveland. This, of course, is ridiculous; the New Castle bodies had been turning up since 1925 (although records indicate murder victims being fished out of the marsh since the early 1900s), years before the Mad Butcher ever came into existence. The marsh bodies, as I pointed out, were almost always discovered in the fall, either in October or early November, as was the case in 1940. Also casting doubt on this theory is the fact that the cities of New Castle and Cleveland are separated by more than 100 miles. While the Pittsburgh and Lake Erie Railroad's path did conceivably link the two locations, one can't help wondering why the bodies in the Murder Marsh only seemed to turn up in the fall.

The following appeared in the Harrisburg Telegraph on Nov. 2, 1940:


Did you enjoy this article? If so, then pick up a paperback copy of Pennsylvania Oddities, which features even more true stories of the strange from around the Keystone State, as well as more in-depth versions of some of the more spectacular stories shown on this blog. Only $14.95 and free shipping is available!