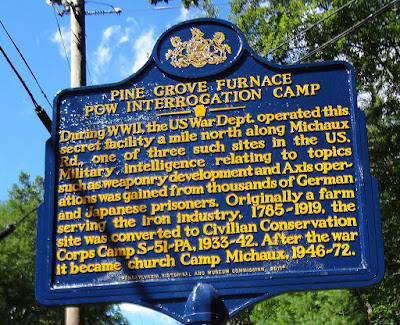 In the heart of some of the commonwealth's most breathtaking natural scenery lies the ruins of a secret army camp used during Word War II to interrogate enemy prisoners. For thirty months the Pine Grove Furnace Prisoner of War Camp operated in the depths of Michaux State Forest, its very existence known to but a select few, where military intelligence officers endeavored to extract enemy secrets about Nazi weaponry and military tactics.

The site, which originally served as a farm for the nearby iron furnaces and later as a camp for the Civilian Conservation Corps, has been preserved by the Cumberland County Historical Society with funding from the Community Conservation Partnership Program and other grants. Thanks to the exceptional efforts of the CCHS, lovers of history can now enjoy a self-guided walking tour of Camp Michaux (click here to download) and learn about this rare gem in Pennsylvania's majestic treasure chest of history.

I explored Camp Michaux earlier this week to snap a few photos, marveling at how such a fascinating piece of history manages to remain virtually unknown to folks who live not far from the site. Truth be told, I actually spend about six hours there and must have given the impression that I was a tour guide or caretaker; two separate groups of visitors approached me to ask questions about the site. Fortunately, I had done a fair amount of research before heading out, and I'd like to believe that I performed my duties as an impromptu tour guide rather admirably. However, if you really want to learn more about Camp Michaux, the CCHS offers twice annual tours. 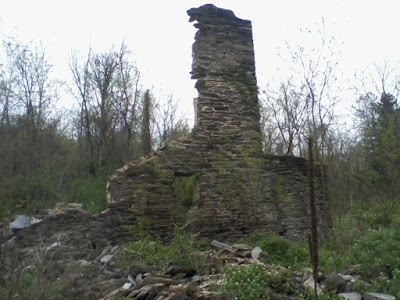 One of the most interesting sights to see is the ruins of the old barn, right off Michaux Road. The barn was part of Bunker Hill Farm, which dates back to 1787. In the late 1800s the farm was purchased by the South Mountain Iron Company to provide food for the workers and families of the Pine Grove iron furnace. In 1912 the iron company sold the land to the state, and the farm was leased out to John Gardner. The farm ceased operations in 1919 and the barn fell into disrepair. A large portion of it collapsed in 2016, although the portion that is still standing is worth seeing. Foundations behind the barn are part of the POW camp's stables where the army's horses were housed, which were kept in case of a jailbreak.

The foundations nearest the entrance to the camp were built in 1933 by the CCC for their forestry office. In 1942, when the POW camp was opened, this was the building in which the interrogations were held, under the direction of Captain Laurence C. Thomas. After the facility was closed in 1946 the building was used as a church camp. The building, then known as Michaux Lodge, burned to the ground in 1970 and the site was abandoned two years later when the church's lease expired. 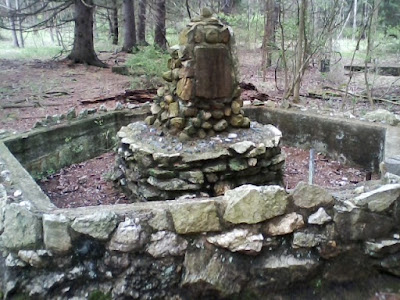 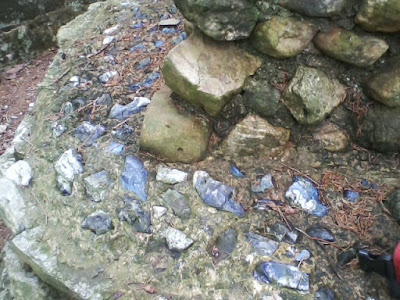 Another must-see feature on the site is the CCC fountain, which is embedded with chunks of shiny, gem-like blue slag, which is a type of glass formed as a waste product in the iron smelting process. Not far from the fountain the CCC also constructed a star insignia embedded with blue slag and white quartz. In total, the CCC constructed more than 40 buildings on the site, most of which have disappeared without a trace. 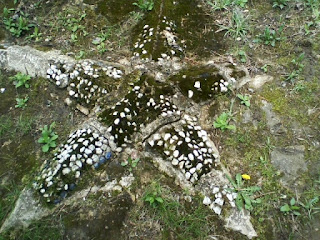 The ruins of the bathhouse still feature tiles from the shower stall. My guess is that these tiles were not from the POW camp era, but were laid down when the site served as a church camp (I could be wrong, however). Not far from the bathhouse were the barracks for the camp's 167 Japanese prisoners. German prisoners-- most of them U-boat commanders-- were housed in different barracks.

Nazi prisoners were seldom kept at the camp for more than a week or two. This prevented them from forging relationships with other inmates and planning escapes. If a prisoner turned over any valuable intelligence, they were sent to a different facility in Virginia.

There were roughly 1,200 POW camps on American soil during the war, housing 425,000 Axis prisoners. Many of these centers were small, unimpressive affairs housed in high school gymnasiums, churches and other spaces. What makes Pine Grove Furnace's POW special, however, was that it was one of the few interrogation centers on U.S. soil during the war.

Prisoners were shipped to these interrogation camps on buses with blacked-out windows in order to keep the location secret. It was standard procedure to "bug" the barracks with surveillance equipment. These listening devices were quite primitive (and large) by modern standards.

As to the interrogations themselves, this was uncharted territory for the U.S. military at the time; interrogation wasn't used to any great degree during WW1 because it was viewed as "uncivilized". If you ever read any books written by those who fought in WW1, you'll often find colorful and interesting descriptions of fighting "etiquette". History records several instances of fighter pilots who let their adversaries escape in the middle of a dogfight because the enemy had run out of ammunition, for instance. Manfred von Richthofen, the famed Red Baron, was buried by the Australian Flying Corps; American and British squadrons came to pay their respects at the funeral, leaving a wreath on the grave inscribed "To our gallant and worthy foe".

In the WW1 era, surveillance and interrogation would have been viewed with great disgust. When WWII rolled around, the U.S. military realized there was great value in prisoner interrogation. Unfortunately, they didn't have a clue as to how to do it. So they turned to the British.

It was a British intelligence agent, Maj. Sanford Griffith, who wrote the book on interrogation (literally). In his interrogation instruction manual, which was used by the Pine Grove Prisoner of War Camp, Griffith shared some helpful hints and recommendations, such as: "People love to answer questions. This goes for German prisoners-- if asked right."

When dealing with Nazis, Griffith advised exploiting their weaknesses:

"Among exploitable German attitudes and weaknesses, we include: (1) vanity, (2) venality, (3) lack of broad basic education, (4) consequent lack of sense of proportion, (5) the school teacher urge, (6) dependence on slogans rather than on solid study, (7) a quiz enthusiasm, (8) over-bureaucratization, (9) gangster mentality of leaders, (10) Nazi double-standards, (11) widespread superstitions, (12) craving of outside recognition.
Griffith apparently believed that if you want to get military intelligence out of a Nazi, skip the torture and tell the German that he's ugly, and that if he doesn't spill his guts, you'll make him walk under a ladder or break a mirror.

As a matter of fact, the federal government was worried that the prisoners held at these interrogation camps weren't being given a hard enough time. During the war, the House Military Affairs Committee actually sent investigators into 25 POW camps to investigate claims of "prisoner coddling".


Records indicate that approximately 7,000 prisoners of war were housed at Pine Grove Furnace Prisoner of War Camp between 1942 and 1945. 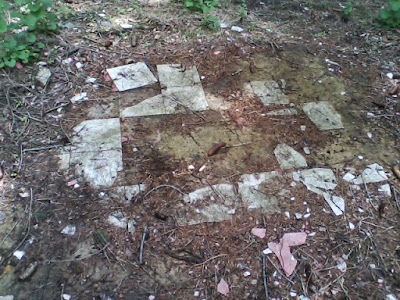 One feature that's hard to miss is the swimming pool, which was built in 1954 for the campers of Camp Michaux at a cost of $40,000. Because the pool was spring-fed, the water never completely drains, and on my visit I noticed that dozens of frogs now call this spot home. 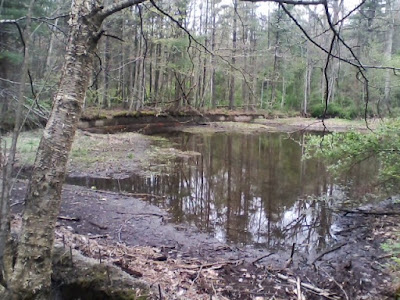 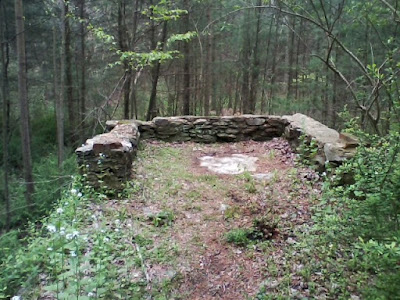 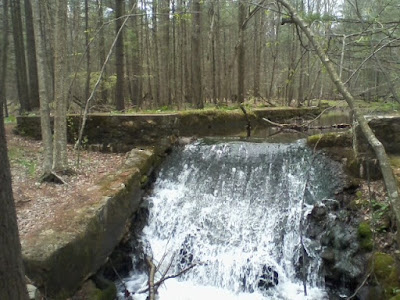 Two of the better-preserved ruins include a bridge abutment from the road that crossed Tom's Run and the Tom's Run dam. An inscription on the dam's concrete indicate that it was built by a German prisoner in May of 1945. 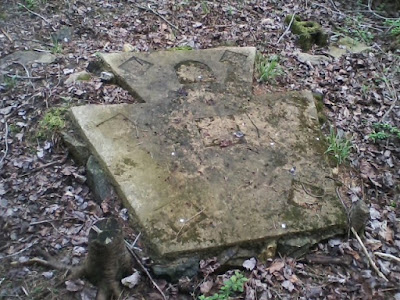 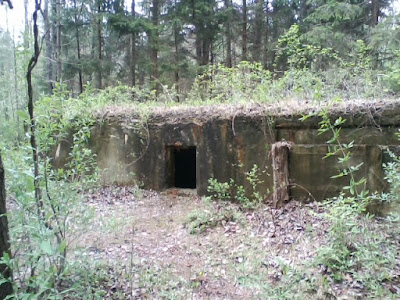 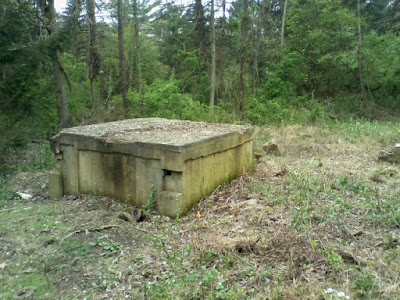 Hopefully, one day this amazing site will be placed on the National Register of Historic Places, but as any historian will tell you, it's a long, frustrating process that can take years. Of all the things I took away from my visit to Camp Michaux, the thing that made the greatest impression on me is just how quickly Mother Nature reclaims what is hers. Even though the site was used as a church camp up until the 1970s, I was surprised by how overgrown the grounds had become in just a few decades. Who knows what Camp Michaux will look like in another 30 or 40 years? Check it out while it's still here for us to enjoy.
Labels: Cumberland County military history