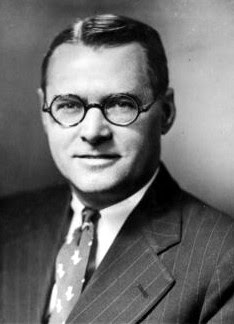 But when it comes to state governors, there's one name you won't find on a street sign or football stadium, however-- and it is a name that even many Pennsylvania historians might not recall.

That governor is John Cromwell Bell, and if you don't recognize the name, it's because his tenure as governor of the Commonwealth of Pennsylvania lasted just 19 days-- making him the shortest-serving governor in state history.

A Philadelphia native, Bell came from a family with a political pedigree; his father served as Pennsylvania Attorney General while his grandfather served as a U.S. Representative during the Civil War. After graduating from the University of Pennsylvania in 1917, Bell was admitted to the bar and entered private practice, eventually becoming a senior partner in the law firm of Bell, Murdoch, Paxson and Dilworth.
Bell's political career began in 1919 as assistant city solicitor of Philadelphia. After serving in that capacity for three years, he became assistant district attorney for the city of Philadelphia.

As a conservative Republican, he was a vocal critic of Franklin D. Roosevelt and published several pamphlets condemning FDR's New Deal policies.

Bell was elected Lieutenant Governor in 1942, easily defeating his opponent, Pennsylvania Speaker of the House Elmer Kilroy. He served under Governor Edward Martin, who also won in a landslide victory in 1942.

Gov. Martin had the benefit of name recognition; as a military general, he was instrumental in the development of Fort Indiantown Gap (for several years the facility was designated by the federal government as the Edward Martin Military Reservation). He also served as state treasurer, auditor general and chair of the state Republican Party.

Naturally, when the 1946 election rolled around, Martin's name was at the top of the list to challenge the controversial Joseph F. Guffey for his seat in the U.S. Senate. Guffey, considered by many political historians to be among the worst senators in American history, had a reputation as being a Democratic Party hack. A British political historian once described Guffey thusly:

"A noisy administration supporter who wraps himself in the Roosevelt flag and has been advocating for a fourth term for some time. A very typical Pennsylvania politician who has decided to throw his lot in with the President and has thus become an obedient party hack not of the purest integrity."

Not surprisingly, during the election of 1946, Gov. Martin defeated Guffey in an epic blowout. When the votes were tallied, Edward Martin defeated the incumbent senator by nearly 20 points-- Martin got 59.3% of the vote, while Guffey got just 39.8%.

After defeating Guffey, Martin resigned as governor and was automatically succeeded by John C. Bell, whose 19-day term in office lasted from January 2 to January 21, 1947.

Bell later served as a Justice of the Supreme Court of Pennsylvania, holding that position for over two decades. He retired as Chief Justice in 1972 and died two years later at the age of 81.