Tragedy on the Susquehanna: The Explosion of the Steamboat 'Montour' 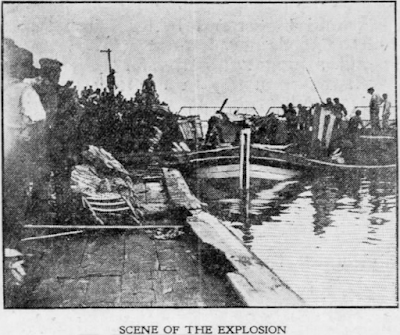 Saturday morning, July 13, 1901, dawned sunny and bright and the streets of Sunbury were buzzing with activity. While the women of the city made their weekly rounds to the shops and markets, the men and children headed to the river to fish and swim and make the most of this beautiful, lazy summer day.

At the Market Street wharf, where the Clements coal dredge and a number of small wooden boats were moored, a number of boys were casting their lines into the water. Among them were Roy McDonald, age 11, Harry Reed, age 12, and William Pullen, 17. These boys were joined by two sets of brothers, Frank and Charles Keller, ages 8 and 12, and Arthur and Allen Fetzer, 11 and 14.

The boys were probably too preoccupied to pay much attention to the gathering of prominent Williamsport gentlemen who waited on the wharf with their poles and tackle boxes in hand.  And they probably paid even less attention to Butler Wendt and William Gaughler, the engineers tinkering with the steam gauge of the Montour, a pleasure boat owned by the Sunbury Boat Club that was moored thirty-five feet away.

The Montour had just returned from Shamokin Dam earlier that morning, and Wendt and Gaughler were making the steamboat ready for its next excursion. Superintendent E.B. Westfall, of the Pennsylvania Railroad, had invited a party of railroad officials, bankers, lawyers and other prominent businessmen out for a day of fishing on the Susquehanna. It was just after nine o'clock, and the engineers were almost done with their preparations.

Butler Wendt opened the fire door and threw in a few shovelfuls of coal. He then checked the steam gauge-- it registered a perfect sixty-five pounds of steam. The water gauge indicated that the boiler was full. Satisfied that the Montour was ready to take Superintendent Westfall and his friends on their fishing trip, the engineers turned over the boat to her pilot, George Frymeyer, a veteran riverman who knew the Susquehanna better than anyone in Sunbury.

After his job was done, Wendt walked uptown to run some errands. By 9:45 he had nearly reached the Central Hotel, and that was when he heard what sounded like the blast of a mighty cannon. The explosion was so loud that everyone for miles around heard it. Women fled from the markets in fear, dropping their baskets of groceries to the ground. Some shouted that it was an earthquake. Others ran for cover, wondering if the quiet, rural countryside had been invaded by an unknown enemy army. When the initial shock subsided it was evident that the explosion had come from the river, and several hundred residents of Sunbury raced to the wharf eager to discover what had happened.

The sight that met their searching eyes was far worse than anything they could have ever imagined.
One description of the tragedy, from the Lewisburg Chronicle, reads:

Women turned pale and had to be helped away, and even robust men turned and left, so sad and pathetic was the scene.

One reporter from the Williamsport Sun-Gazette wrote sadly, but poetically:

The scene was an awful one. Lying on the ground, writhing in great agony, suffering untold tortures and staining the grass with their life's blood, lay five young boys, while about 100 feet away, lying near the water's edge, the shattered remains of what was once a steamboat told the awful tale of what had occurred.

Soon hundreds of people flocked to the the scene and the spectacle was of such a nature that it will live forever in their memories. Bruised, burned and mangled, dripping with blood, with distorted and unrecognizable features, the injured boys, in their terrible pain and distress, called loudly to their loved ones to come to their assistance and alleviate their awful sufferings.

One of the first women on the scene was Mrs. Fetzer, whose children had left home to go fishing that morning. "Where are my boys?" she cried, elbowing her way through the shell-shocked crowd. There are no words in any language ever spoken by the human tongue that could describe how the worried mother must have felt when she reached the wharf and recognized the horribly mutilated body of her 14-year-old son Allen lying cold in death, and her youngest son, Arthur, bloodied and broken, barely clinging to life. Arthur was rushed to the Mary Packer Hospital, but died hours later.

Roy McDonald, one of the boys who had survived the explosion with minor injuries, gave the following description what had happened:

"I heard a loud noise and when I turned to look to see what was wrong I saw a boy which proved to be Allen Fetzer going up in the air. He went as high as the trees along the bank and fell in a pile of wood. Pieces of wood and iron fell in all directions and I saw several other boys fall in the water, but it came so sudden that I didn't know what happened until the men came."

The men Roy was referring to were Frank Lawrence and Samuel Welker, workmen who were closest to the wharf when the explosion took place. Lawrence stated:

"By the time we reached the ground an awful sight was ready for our view. The entire roof and side walls of the Montour had been blown to atoms and ruin was to be seen on every side. The contents of the boat were scattered among the pile of debris and the machinery on a nearby digger was twisted into an almost useless mass of scrap iron... We got Frank Keller out from under the engine on the coal digger and the other boys were taken from the water. The body of Allen Fetzer lay along the bank about 25 feet away. We heard him groan once, but before we got to his side he was dead."

Charles Keller died at the hospital the following night. The twelve-year-old boy had been so severely injured that most people were amazed that he clung to life as long as he did. He had sustained several broken ribs, a severed artery in his shoulder, and was badly burned all over his entire body.

It took two days to locate the pilot of the steamboat, George Frymeyer, who was blown more than one hundred feet out over the river. Frank Keller, from the Sunbury hospital, told investigators that Frymeyer had just put water into the boiler and was standing with his hand on the valve when the boiler exploded.

A party of more than fifty searchers and divers dragged and dredged the river with hooker poles and grappling irons all day Saturday, without success. Two of Frymeyer's brothers were in the search party, going about their ghastly task in stoic silence, never stopping for a moment-- not even as their elderly gray-haired father wept from the riverbank.

Fate had been unreasonably cruel to old Mr. Frymeyer. Twenty years earlier another one of his sons had met his death through the explosion of a boiler at a saw mill in Shamokin Dam.

The remains of the steamboat pilot weren't found until Sunday afternoon. When his corpse was recovered from beneath twenty feet of water, it was evident that he had received the full force of the blast; his entire chest had been caved in, his skull was fractured, and his right leg was dangling by a thread.

On Friday, July 19, the coroner's jury reported that they were unable to find the cause of the explosion and, therefore, nobody could be held responsible for the tragedy. Numerous experts had inspected the wreckage and, by all accounts, there was no earthly explanation for why the boiler had malfunctioned.

Did you enjoy this article? If so, then pick up a paperback copy of Pennsylvania Oddities, which features even more true stories of the strange from around the Keystone State, as well as more in-depth versions of some of the more spectacular stories shown on this blog. Only $14.95 and free shipping is available!
Labels: Northumberland County