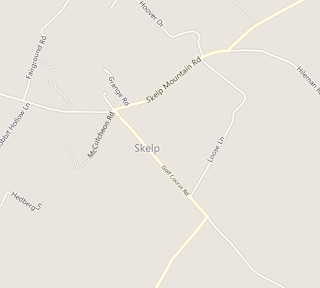 History buffs from the Sinking Valley region of Tyrone Township, Blair County, have long debated the origins of the name of the tiny village the sits about fifteen miles north of Altoona. On modern maps, the name of the village appears as Skelp, and sits at the foot of Skelp Mountain. However, older maps and newspapers variously refer to the village as Scalp, while others have referred to the village by another name, Scalp Level.

I've pondered this mystery for quite some time, and concluded that the name was changed from Scalp to Skelp because, well, who wants to live in a place called Scalp? Another possibility is that the word "scalp" brings to mind bands of blood-thirsty Indians roving about the valley with tomahawks in their hands, intent on slaughtering innocent, God-fearing white settlers, and so the name was changed out of political correctness.

I finally put some effort into solving this mystery, but came up empty-handed. There really is no definite reason why this tiny village has gone by an assortment of names. But I did learn a thing or two about Skelp. Or Scalp. Or Laurelville, as it was originally called (more on that later).

First, we should address the name Scalp Level, which appears frequently in Blair County newspapers during the late 19th and early 20th centuries. I believe that I can say confidently that the village in question was never officially called this, because there is another town with that name about sixty miles west in Cambria County that predates the existence of the village in Tyrone Township.


According to Milwaukee Journal writer Frank L. Remington, who was enamored with strange place names, this borough in Cambria County got its name after a local landowner with an affinity for precision topiary ordered his farmhands to "scalp them bushes level". In their 1958 book, "The Origins of Unusual Place-Names", authors Armond and Winifred Moyer assert that a whiskey-drunk sawmill owner ordered his laborers to clear brush by cutting them down to scalp level.

My research indicates that the first time that the Scalp Level (Cambria County) place name appeared in print was 1853, when a notice in the Ebensburg Democrat informed readers that John Harshberger was sent to jail for robbing the store of William Bonnaker in Scalp Level. A map of Richland Township (below) from 1890 clearly shows the name Scalp Level. 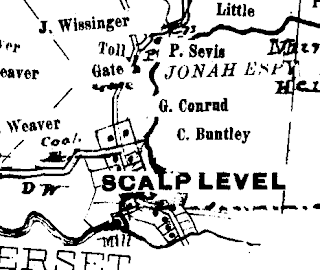 How Scalp Level Really Got Its Name

However, I disagree with journalist Frank Remington's 1969 article and only slightly agree with Armond and Winifred Moyer when it comes to the origin of the name. A Pittsburgh Daily Post article from July 18, 1878, provides a detailed history of the Cambria County borough. The land on which the borough presently sits was originally owned by Jacob Eash, who held a "frolic" on his property. In those days, it was a custom to invite neighbors to your property for a day of wood chopping and brush clearing, with some refreshments served now and then to break up the monotony of hard labor.

Your first thought is probably, "Gee, that doesn't sound like a lot of fun", but if you think about it, it makes perfect sense to host a frolic, because, sooner or later, one of your neighbors would need his land cleared as well, so in the end it all evened out. It was pretty much a case of "I'll scratch your back if you scratch mine".

Anyway, Eash instructed his guests to "scalp them low" (them being saplings, weeds and brush) and when the grueling work was done, one of the laborers shouted, "Hurrah for scalp level!" The name stuck and Scalp Level was born.


A Tale of Two Scalp Levels

Conversely, the first time that present-day Skelp in Blair County's Sinking Valley appeared in print as Scalp Level was in 1875-- nearly three decades after Scalp Level in Cambria County sprang into existence.

A news item from April 19, 1883, on the death of Sarah A. Walton states (rather eloquently) that she "lived for a number of years in Scalp Level, Sinking Valley, and her husband and nearly all her family sleep beneath the clods of the valley at the Brick church."

By this time, the Blair County village consisted of little more than a few farms, the Cryder school house and the Scalp Level Armory. My guess is that someone from Sinking Valley had visited Cambria County, liked the name, and brought it back.

As for Scalp, this name was used for a longer period of time and appeared more frequently in print, but does not pre-date references to Scalp Level, however. For example:

"A couple of nights ago a man entirely nude came to the door of Mr. John Cryder, near Scalp, Sinking Spring, and wanted something to eat and demanding admission, which of course was refused."-- Altoona Tribune, May 29, 1884.


Prior to 1875, documents and newspaper articles list Cryder's place of residence simply as Sinking Valley. This, to me, suggests that Sinking Valley became known as Scalp Level sometime around 1875. By 1884, the word "Level" had been dropped from the name, and the village then became known as Scalp until at least 1938, which appears to be the last time Scalp appeared in print. A notice in the October 27, 1938 edition of the Altoona Tribune reads: "A Townsend mass meeting will be held in Grange Hall at Scalp, Sinking Valley, this evening at 7:30 o'clock."

The name Skelp, however, appears to have first cropped up sometime around 1878, indicating that "Scalp" and "Skelp" were used interchangeably for several decades to refer to the same place. Skelp is the word commonly used in the iron and steel industries for wrought iron strips that are used to make tubes and pipes. While the iron industry has been important throughout most of Blair County's history, there are no records whatsoever indicating that skelp played a role in the history of Scalp, therefore it can be theorized that Scalp became Skelp and not vice-versa.

One particularly interesting reference to Skelp as a place name is from 1907:

"James Bailey has purchased from Thomas M. Fleck the store house property near Skelp. It will be converted into a dwelling house, and Mr. Bailey will occupy it after his sale on the McMullen farm."--Altoona Tribune, March 14, 1907

This is an important reference because Henry McMullen was one of the early settlers of Sinking Valley. During McMullen's time, the village also went by the name of Sinking Valley Mills. Prior to that, it was known as Laurelville. According to "History of Huntingdon and Blair Counties, Pennsylvania" (J. Simpson Africa, 1883), the first improvements were made in 1808 when Henry Henchey built a house on the land. A store was opened by James Clarke in 1831. Although several lots were laid out, it was written in the aforementioned history book that "the place never attained much importance".


So what, then, is the real name of this Blair County village? Scalp? Scalp Level? Skelp? After spending a great deal of time researching this matter and poring over hundreds of newspaper clippings and hundreds of pages of Tyrone Township history, here's my opinion-- the folks who live there ought to have stuck with Laurelville.

Did you enjoy this article? If so, then pick up a paperback copy of Pennsylvania Oddities, which features even more true stories of the strange from around the Keystone State, as well as more in-depth versions of some of the more spectacular stories shown on this blog. Only $14.95 and free shipping is available!
Labels: Blair County Cambria County