The Tragic Fate of Jonathan Salmon, the Jonah of Honesdale 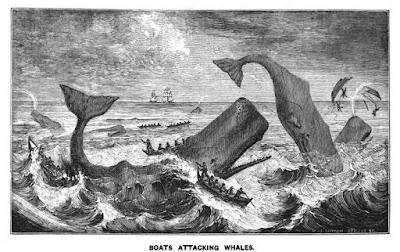 At the historic Glen Dyberry Cemetery in Wayne County can be seen many exquisite monuments. There is the Appley family plot with its soaring thirty-foot obelisk and beautifully-carved busts of Italian marble, the Dimmick family plot, marked by an equally extravagant granite column that towers over the graveyard like a skyscraper in the desert, and the striking monument marking the graves of Harriet and Giles Greene, with its stunningly carved angel seated on a throne.


But hidden among the many rows of gravemarkers is a weatherbeaten slab with a curious inscription that has been virtually obliterated by the elements. It is a headstone erected in memory of Jonathan H. Salmon, a young Honesdale man who died in 1847 in a most peculiar fashion. And while this monument can be found at Glen Dyberry, Jonathan's bones do not repose beneath the soil; for his body was lost at sea thousands of miles away from home.

The whaling ship Arabella set sail from Sag Harbor, New York, on August 8, 1847. Off the southwest coast of South America that December the crew spotted a group of sperm wales. They took three of the enormous cows and attempted to kill the fourth. Armed with harpoons, a group of whalers  led by the ship's second mate, Jonathan Salmon, piled into a smaller vessel and pursued their prey. Jonathan maneuvered the boat expertly and one of the whalers got off a clean shot. However, before the crew could pull away from the wounded beast it struck the boat with its mighty tail, lifting it clear out of the water and dumping the sailors into the sea. Jonathan landed close to the whale, his oar still clutched in his hand.

Suddenly, the whale attacked Jonathan and, with its enormous jaws wide open, swallowed whole the young sailor. But he had the presence of mind to extend the oar just as the whale closed its mouth. The whale's jaws clamped down, but it could not completely close its mouth because of the oar. This allowed Jonathan an opportunity to escape. He swam out into the ocean, and spotted his brother coming out to save him in a rowboat. His brother had just pulled him over the side of the vessel when the angry whale struck again.

This time Jonathan had no oar to save him as the whale's gigantic jaws closed down on him like a trap. The whale dove below the surface, never to be seen again.

It was 1849 when Jonathan's brother, C.W. Salmon, returned to Honesdale to erect a marble monument in his memory, its inscription reading:

But the town's citizens had already been made aware of Jonathan's death. The first mate of the Arabella was a man by the name of Hodgdon, who was from Carbondale. It was Hodgdon who reported the young sailor's fate to the local newspaper, by way of a letter, which read as follows: 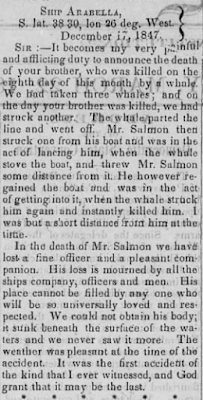 As fate would have it, Jonathan Salmon died on December 8, which also happened to be his twenty-eighth birthday.


Did you enjoy this article? If so, then pick up a paperback copy of Pennsylvania Oddities, which features even more true stories of the strange from around the Keystone State, as well as more in-depth versions of some of the more spectacular stories shown on this blog. Only $14.95 and free shipping is available!