The Supernatural Experience of Henry Ort

Just outside of Lewistown is a picturesque little valley of patchwork farms and ancient barns. Known as Ort's Valley, this place was the home of John and Mary Ort, who were among the first to settle in the region in 1793.

Although the spot where their farmhouse once stood is now a concrete maze of access ramps to Routes 322 and 522, nestled among the scenery is a lone remnant of the old homestead-- the Ort Family Cemetery. Here, in this tiny plot flanked by speeding traffic and modern homes, lies generations of long-forgotten Orts. The earliest interment was that of Susan, the thirteen-year-old daughter of John and Mary, who was laid to rest in 1815. Also laid to rest here was Henry Ort, who, in 1903, bequeathed the cemetery to his heirs to be held in trust for future burials of his descendants.

Had it not been for Henry's efforts, the historical graveyard undoubtedly would've been plowed under by the steamshovels and bulldozers of progress, the coffins disinterred and moved to one of Lewistown's other cities of the dead. Thanks to Henry, all of the Orts who came before him-- John, Mary, Susan, Eliza, Elizabeth, Hannah, and a few infant sons and daughters who didn't live long enough to earn a name, can rest in peace for all eternity.

Perhaps then it is no surprise that, shortly before his own death in 1907, Henry Ort experienced a supernatural event that not only seems to defy explanation, but suggests that a heavenly reward had been set aside for him by a Higher Power.

Henry's eighty-sixth birthday occurred on March 27, and to celebrate the occasion Mrs. Ort invited a handful of close friends over to their old-fashioned house for dinner. The celebratory meal passed quietly and cheerfully, with Henry having eaten his dinner from his favorite dinner plate, an old-fashioned ironstone chinaware plate that had been in the Ort family for nearly thirty years.

There was nothing exceptional or remarkable about this inexpensive, utilitarian plate--  according to the Philadelphia Inquirer, the dinner plate in question was described as being from "the 'Anchor Brand', with the English coat of arms on the back" and "common enough to the trade of 40 years ago" (I'm not a collector of antique china, but my guess is that the reporter was describing a plate by Davenport, a Staffordshire-based porcelain manufacturer of the 19th century that used an anchor symbol as a makers mark). No one noticed anything peculiar about the plate until after Mrs. Ort washed it and put it back into the china cabinet.

About an hour after washing the dishes, Mrs. Ort's attention was attracted to china cabinet, and she noticed that the plate which her husband had used had suddenly and strangely been imprinted with the likeness of a dove.

The picture is in the nature of a photograph or shadow, pearl gray in color and perfect in its most minute details. Every feather may be counted without the aid of a glass, and when the light falls favorably, one can imagine he detects the eye moving. The claws are drawn up close to the breast feathers, and the small scales on the skin about the toes are plainly discernible with the naked eye. The figure "5" appears plainly marked on the breast of the bird.

Hundreds have visited the little farm house, certain  in their belief that after seeing the plate they could offer a theory which would solve the problem, but after close examination, they are free to admit its existence. Their many theories are exploded in their inception by the fact that the picture is too perfect in detail for the work of human hands.

Mrs. Ort was worried about the seemingly miraculous appearance of the dove on her husband's dinner plate, especially considering that it was his birthday, but both she and Henry thought that it must be a good omen-- after all, the dove is regarded as a harbinger of peace.

As it turned out, this was to be Henry's final birthday celebration. Seven months later, on November 30, 1907, he passed away and was laid to rest in the tiny little cemetery which still bears his family's name.

While it's tempting to think that the appearance of the dove-- long a symbol of the Holy Spirit-- on Henry Ort's plate on the day of his final birthday is miraculous, the explanation just might be more natural than supernatural. 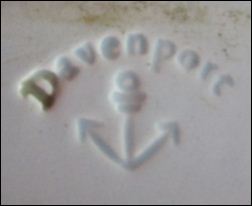 Since the original newspaper article states that Ort's "Anchor Brand" china plate had been in his family for nearly thirty years, one can assume that the plate in question was manufactured no later than 1880, and possibly quite earlier. Davenport began manufacturing china in 1795, and continued to do so using its distinctive anchor symbol maker's mark until 1887, when the company was purchased by Burleigh Pottery. As it turns out, birds-- often handpainted with striking realism by Davenport's artists-- were a popular motif for much of the company's history.


Was it possible that the Ort family had purchased a secondhand Davenport plate that, at one time, had been painted? Perhaps decades of usage and washing had worn away the handpainted bird, leaving behind a nearly-invisible residue that somehow became visible only after Mrs. Ort's washing of the dishes.

It would seem that, yes, such a thing could be entirely possible.

It was not uncommon for china manufacturers of the 18th and 19th centuries to use paints and glazes containing oxides of metals such as lead, tin, chromium, copper, iron and mercury. Prior to the invention of liquid dishsoap in 1916, dishes were washed with ordinary soap. Like most farming families, the Orts probably made their own soap with animal fats and lye. Lye, of course, is just another name for sodium hydroxide, and under the right circumstances, sodium hydroxide can darken certain metallic materials.

Oxide coating, more commonly known as "blackening" is a process by which metal objects are submersed in a bath of sodium hydroxide in order to create a protective coating on the desired object. During the blackening process, sodium hydroxide creates millions of microscopic holes on the surface of the metal. In the final step a sealant, usually oil, is applied to the metal. The oil absorbs into the porous surface and bestows the metal with a corrosion-resistant coating. Of course, heat (anywhere from 220 to 286 degrees) is necessary to properly darken the object.

Perhaps on the day of Henry's birthday, Mrs. Ort washed the plate with lye soap in a basin filled with hot water. The lye reacted with the invisible residue from the metallic paint, creating millions of microscopic holes which became sealed by the oils and fats from the homemade soap. Perhaps the water was hotter than usual on this particular day-- just the right temperature to make the image visible-- thus explaining why it had never happened before.