Until the construction of railroads in the late 19th century, Bedford County was regarded as a wild and untamed place with few settlers. Villages were few and far between, and when it came time for those who lived in rural Bedford County to pass on to the hereafter, relatives of the deceased often had a difficult time finding skilled stonecarvers to create markers for the graves. As a result, many of the region's early pioneer settlers were laid to rest in unmarked graves, or in graves marked by crude, simple slabs.

Fortunately, two of Bedford County's earliest settlers happened to be highly skilled stone carvers. These two men-- James H. Boylan and his son, Alvy-- created hundreds of grave markers of remarkable quality and artistic merit from sandstone quarried from Juniata Township. While most gravemarkers of the era are weathered and decipherable, the carvings on these Boylan gravemarkers (some of which date back to 1808) can still be read clearly today. As a result, the stunningly beautiful sandstone slabs crafted by the Boylans have become something of a Bedford County tourist attraction in their own right.

Sometime around 1812, when the fledging United States found itself once again taking up arms against Britain, James Boylan (1780-1853) and his wife Hannah left their home in Ohio and came to Harrison Township in Bedford County. James and Hannah brought along their newborn son, Alvy, while an older son named George chose to remain in Ohio.

James was already a skilled gravestone carver when he left Ohio, and he continued to practice his trade when he arrived in Bedford County, even though he had nothing but primitive tools to work with. Because of his skill and talent he soon became the most sought-after gravestone carver in the region, and it wasn't long before Alvy joined his father in the family business. The first known grave carving credited to Alvy Boylan is from 1829, which would have made him a mere teenager at the time. 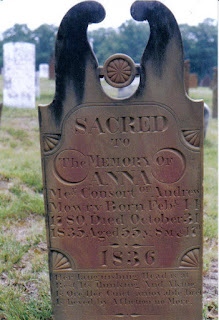 The Boylan stonecarving business flourished during the following two decades. Of the 175 grave markers at the Old Log Church cemetery near Schellsburg, more than 150 were carved by the Boylans. Although James and Alvy rarely signed their work, three of the sandstones at Schellsburg are signed by the Boylans. Another dozen or so Boylan gravestones can be found at the Old Union Cemetery in Buffalo Mills. 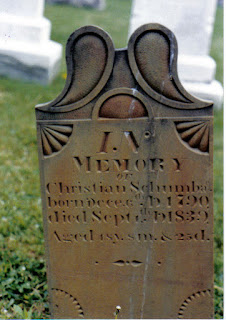 After James passed away in 1853, Alvy attempted to carry on the family business, but the increasing popularity of railroads allowed stone to be imported more cheaply from other locations. Before long, residents of Bedford County turned away from their native sandstone and began to favor imported marble monuments. It is unclear when Alvy carved his last stone, but it believed that it was between 1853 and 1855. Alvy died in 1893, four decades after laying down his chisel and hammer. 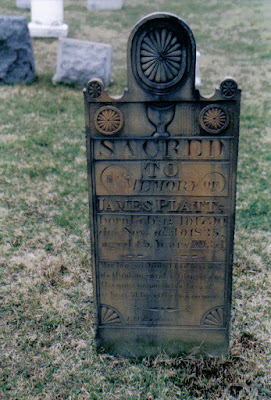 There is a strange and ironic footnote in the story, however. After James H. Boylan died in 1853, he was buried at the Old Union Cemetery... in an unmarked grave.

Was he so devastated by his father's passing that he decided to walk away from the trade forever? Did he feel that nothing he could carve from sandstone or marble could ever serve as an adequate tribute to the man who had given him the gift of life? Or did some sort of injury or physical impairment prevent him from carving a gravestone for his father? The more you stop and think about it, the more fascinating the story of James and Alvy Boylan becomes.
Labels: Bedford County unsolved mysteries