A Visit from the Ghost of the Undead? 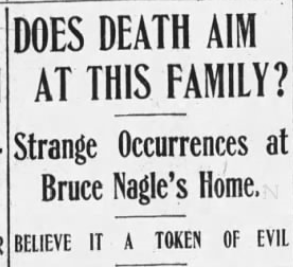 In August of 1903, the southeast section of Wilkes-Barre was mystified by the strange occurrences taking place at the home of Bruce Nagle-- occurrences so strange, in fact, that Bruce became convinced that death was about to visit his family.

On August 11, 1903, the Wilkes-Barre Times Leader reported that "mysterious groans and loud rappings have been heard around the house at all hours of the night", and that these uncanny disturbances had plagued the Nagle household for two consecutive evenings.

"So terror stricken did the family become that this morning at 1 o'clock many of the neighbors and three policemen were out trying to solve the strange phenomena," continued the Times Leader. The newspaper immediately dispatched a reporter to the home, who interviewed Mrs. Nagle.

"It was Sunday night we first heard these noises," she explained. "I was awakened by three loud raps at the front door, and thinking that some of the neighbors wanted to get in, my husband went to the window, and looking out, asked, 'Who was there?' He could see no person, and thinking that it was somebody who had been passing he came back to bed. About ten minutes later we heard the same noise again but could find nobody at the door. This continued until 1 o'clock in the morning, when we finally arose and went downstairs and the noise ceased."

The knocking returned the following evening, but with an additional element of horror-- blood-curdling groans, seemingly emanating from the back porch.

"We all rose and made an investigation," said Mrs. Nagle, "but could find nothing. We all remained up all night and there was no more noise."

The Nagles, as well as many of their neighbors, were firmly convinced that the rappings and moans were a supernatural indication of impending death.

Remarkably, this is exactly what happened.

According to available records, Bruce Nagle lived a relatively long life. Born in Shickshinny in 1883, he spent 53 years of his life working for the Delaware & Hudson Railroad, and passed away in 1959 at the age of 75. His wife died in 1950 and their daughter, Etta, survived until 1965. So who was it who passed away shortly after the ghostly rappings descended upon the Nagle home in 1903?
Interestingly, a brief notice appearing on page 14 of the Wilkes-Barre Record on August 31, 1903, announced the funeral of 18-year-old Chester Pero. Listed as one of the pallbearers was Bruce Nagle, who would have been around the age of 20 at the time. 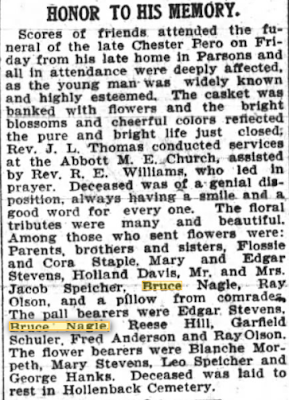 While it is unclear whether or not there is any familial relationship between Bruce and Chester (it is possible they may have been related through marriage; Bruce's wife was Naomi Davis Nagle, and the newspaper indeed mentions that there were other Davises present at the Pero funeral), the fact remains that the relationship between the two young men was close enough to result in Bruce serving as pallbearer.

As for the unfortunate Chester Pero, he met his sudden demise on the morning of August 26, 1903, when he was struck by a northbound passenger train on the Delaware & Hudson tracks near the Sheldon Axle Works. He was hurled by the impact of the passenger train onto the parallel tracks, and was promptly ground to pieces beneath a Central Railroad excursion train, which was traveling in the opposite direction.

Pero's tragic death occurred just fifteen days after the Nagle home was plagued by ghostly manifestations, and, by all accounts, the manifestations ceased after Chester was laid to rest at Hollenbach Cemetery. Could it be that Death itself came to visit Bruce and Naomi Nagle, to warn of the impending demise of a beloved family friend? And did young Chester Pero himself have any sort of premonition prior to his gruesome demise?

While the truth may never be known, it is certainly interesting to think about.