A Strange Drowning at Cascade Park 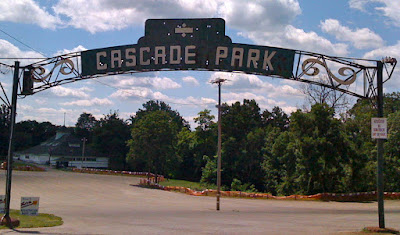 There is something spooky about defunct amusement parks. Visiting the grounds, one can almost hear the ghostly calliope of the forgotten carousel and the laughter of children who once reached for brass rings from atop wooden, jewel-eyed stallions. During the late 19th and early 20th centuries, countless amusement parks could be found spread across Pennsylvania.

Today, only a few of these parks remain. Time, neglect and Mother Nature have reclaimed the others. However, some of these forgotten parks have experienced a rebirth of sorts in recent years, thanks to the preservation efforts of history-loving locals. One such example is Cascade Park in Lawrence County. First opened to the public in 1897, this amusement park was developed by the New Castle Traction Company and boasted what was once the largest dance pavilion in the state. It also featured one of the first roller coasters in Pennsylvania, the Toboggan, and the park also contained a zoo, picnic grove and swimming lake. During its heyday in the 1920s, Cascade Park featured nearly 20 rides stretched across 138 acres. 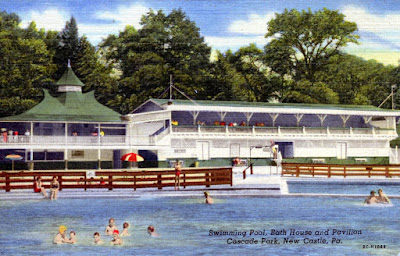 As an amusement park, Cascade Park continued to operate until the early 1980s. By this time local groups had already begun raising funds to restore the historic dance pavilion. In the years since the last candy apple was sold, the old, broken-down rides have been removed, trees have been planted, and nature trails have been laid out. As for the lake, which had been created in 1899 by the damming of Big Run Creek, it disappeared up after the dam collapsed in the 1970s. 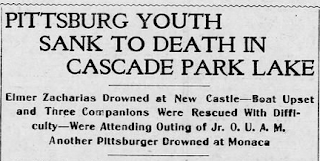 The Drowning of Elmer Zacharias


On Saturday, July 25, 1903, thousands of members of the Junior Order of United American Mechanics flocked to Cascade Park for the group's annual outing. For many of the blue-collar workers who called Pittsburgh home, the annual gathering was the happiest day of the year-- a welcome escape from the sweltering steel mills, dangerous factories and deadly mines where they toiled for twelve to fifteen hours per day. Elmer Zacharias, Edwin Good, Scott Bell and Wesley Hess, were four of those young men who traveled by train to Cascade Park to enjoy the picnic.

Sometime around six o'clock in the evening, Elmer Zacharias and his friends rented a boat and were rowing near the swimming pool at the southwest end of the lake when the boat suddenly capsized, throwing all four occupants into the water. According to eyewitnesses, it appeared that Elmer and one of his friends had attempted to switch positions inside the boat, causing the craft to become unbalanced. Treading water, Elmer called out to his friends that he would be alright; he was a fine swimmer and would have no trouble making it back to shore. His friends had no reason to worry, for Elmer was known throughout Lawrenceville as an exceptional athlete and a star player for the Foster Baseball Club.

The four men began to swim, but somewhere along the way Elmer had disappeared from sight. Only three would make it back to the shore alive.

It was believed that Elmer had been seized with cramps, and three hours later, when his body was fished out of the lake by boaters with grappling hooks, lack of visible injuries seemed to confirm this theory. Elmer's body was taken to the Dunn & Rice funeral home and his parents were notified. But Mr. Zacharias was not the least bit shocked when he was told by the desk sergeant of the New Castle Police Department that his son was dead-- he already knew. 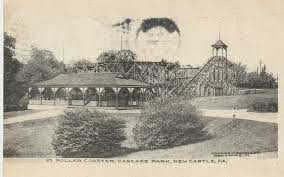 A Case of Telepathy?


It was early Saturday evening when Albert Zacharias, the proprietor of the Merchant's Hotel in Pittsburgh, suddenly looked up from his desk and called out to James E. Tague, his hotel manager, that something was wrong.

"Something tells me my son has drowned," said Zacharias. He had no information to base this opinion on; it was just an uncanny feeling that chilled his bones and turned his stomach.

"Oh, you're just nervous," replied Tague. "What put that idea into your head?"

"No, I feel... sure," the hotel proprietor stated. "He went to that picnic in New Castle this morning. I know something terrible has happened to him. I want to call up New Castle."

And with those words Albert Zacharias left Merchant's Hotel and crossed the street to use the telephone at the Red Star Express Company office. Two minutes later he staggered out of the telephone booth, deathly pale and shaken to the core.

"My God, Tague, I was right," he said when he returned to the hotel. "My son is dead!"
Mrs. Zacharias was in a state of hysterics when her husband returned, at around nine o'clock, to their home at 3650 Mifflin Street. She had just learned of the news from the police, who told her that Elmer's body had been delivered to the undertaker. But Albert was stone-faced; he told her about his strange premonition and how it had come true.

Seldom has a case of telepathy been so well authenticated as that surrounding the drowning of Elmer Zacharias at Cascade Park. In addition to Albert's wife and several of his children, the story was vouched for by the manager of the Merchant's Hotel and the police department. Yet, the explanation for this event, and similar premonitions, still remains to be given. Did the spirit of the drowning victim somehow manage to "reach out" to his father through the ether? Or was it that a father's love for his son can be so deep that the invisible bond cannot be broken even by death?