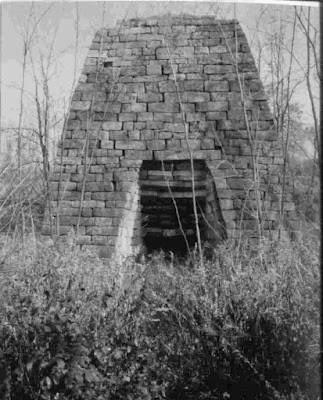 Most people who spend years following their dreams pursue lofty goals. For some, the goal is to be a movie star or a professional athlete, while others pursue a career on Wall Street or in politics, and there are others who dream of patenting an invention or discovering a scientific breakthrough. But for Lewis Kile, an enterprising slaughterhouse worker, his driving ambition was rather different. Kile spent two months desperately trying to become the first person to recover an enormous chunk of iron that had been buried beneath the borough of Northumberland for over a century.

Nobody knows for sure when the iron ball was first formed, but, in all likelihood, the creation of this massive hunk of metal dates back to the era of the Pennsylvania Canal, when the outskirts of town were dotted with several iron furnaces (much like the one pictured above). Up until the 1940s, the street presently known as Priestley Avenue was known as Northway Street, and at the intersection of Priestley Avenue and Wheatley Avenue, on a parcel of riverfront property between Suncom Industries and the Washington Tavern, once stood the old Northumberland Gas Company plant. This plant provided natural gas to Northumberland residents until 1938, when the building was purchased by H.T. Johnson and used, for several decades, as a slaughterhouse. However, during the construction of the Susquehanna Division of the Pennsylvania Canal, which began in 1827 and ended in 1831, this parcel of land was the site of a large iron furnace.

According to local legend, the formation of the massive iron ball was caused by the carelessness of two drunken puddlers. Puddling was a dangerous occupation; the primary job a puddler was to stir vats of molten pig iron with wooden poles and skim off the impurities. Because of the toxic fumes and intense heat, puddlers seldom survived past the age of 30, so these fellows could be forgiven for taking an occasional swig of whiskey on the job. As the legend goes, the two ironworkers fell asleep after heating a large batch of iron. When it came time to "tap" the vats, the intoxicated puddlers were still asleep. As a result of their drunken stupor, several tons of molten metal trickled from the vats and flowed downhill like a river of lava. The metal flowed away from the furnace and into a nearby hole, where it eventually cooled.

As an employee at H.T. Johnson's slaughterhouse, Lewis Kile knew everything there was to know about the mythical ball of iron lurking underground just a few feet outside his workplace, but, when the price of metal spiked in 1938, he immediately realized that he could make a killing by unearthing the gigantic lump and selling it as scrap metal. After making arrangements with a buyer in Lewisburg, Kile bought some dynamite and got to work.

It was January 17, 1938, when he set off the first blasts-- much to the chagrin of residents who lived in the vicinity. Unfortunately for Kile, he discovered that the iron had filtered into cracks and crevices before it has hardened, effectively cementing the metal to several large boulders. It was evident that his task was not going to be as simple and straightforward as he had anticipated. It was also evident that he was going to need more dynamite. A lot more dynamite.

Blasting continued well into the next day, and the day after that. By this time, Kile was able to get a good look at the mammoth hunk of metal, and he estimated its weight to be around seven tons. His explosions had broken off bits and pieces of the iron, and he was able to salvage and sell two tons of the metal. With his earnings, he immediately went out and purchased more dynamite. Some of the old-timers in town chuckled; they recalled the efforts of other folks who, over the course of the previous century, had attempted to extract the legendary iron ball using similar methods. All had had failed. But Lewis Kile was determined to carry on.

After ten more days of blasting a bitter cold front passed through the region, and Kile was forced to abandon his project until spring. This news brought a great deal of relief to the neighbors, whose ears hadn't stopped ringing for two weeks. The weather warmed considerably in early March, and Kile resumed his mission.

On Wednesday, March 2, Kile was in no mood to mess around. He set off his largest charge to date, and the blast was so powerful that it broke two windows in the home of Mr. and Mrs. Fred Mathias, one in the home of Mrs. Martin Zeliff, and practically all of the windows at the slaughterhouse. The March 4, 1938, edition of the Sunbury Daily Item reported:

Not only did the charge break windows, but it killed approximately 15 snakes, which were spending the winter in a crevice of the iron deposit. Some of the reptiles were garter snakes, while others were said to be water snakes. A large crowd of people visited the scene yesterday and saw the iron, as well as the snakes.

The explosion also attracted police to Northway Street. Chief of Police Newton Weirick promptly arrived on the scene and ordered Kile not to set off any more dynamite, but Kile was not dismayed. It appeared that his final blast had broken enough material loose that he could be gather up the rest of the valuable iron with simple hand tools.

Unfortunately, Kile's money-making endeavor didn't make him as wealthy as he had hoped. All the dynamite he used had cost him a small fortune, and the broken windows meant that operations at the slaughterhouse had to be suspended until they were repaired. After paying for the rest of the damage his blasting has caused, Lewis Kile-- much like the molten iron spilled by the drunken puddlers-- found himself in a hole. Since he was now out of work, he eked out an income by performing odd jobs like trimming back shrubs and pulling up tree stumps. The following August, while chopping wood for Mrs. Ruth Thomas in Point Township, his axe slipped, resulting in a serious injury. He was immediately transported to the Mary Packer Hospital, where doctors were able to save his mangled foot.

In later years, Lewis Kile's skill for destroying things and blowing things up came in handy. He was awarded several demolition and excavation contracts. In 1941, he was awarded the contract to dismantle 42 looms at the United Silk Mill on Duke Street, and he also won contracts to replace the sidewalk on Second Street and to lay the foundation for the commercial welding plant on Water Street. His penchant for salvaging things inspired him to go into business as an auctioneer, and he successfully his own auction house for several years.

In July of 1962, Kile was struck by a car driven by an out-of-state motorist while attempting to cross Route 14 on Island Park. With multiple injuries, including a compound fracture of a leg, the lifelong resident of Northumberland fought for his life at Sunbury Community Hospital. After ten months, and multiple corrective surgeries, he was discharged in June of 1963. Surprisingly, he then went back to work. Despite his age and physical condition, he laid a cement sidewalk entirely by himself on Duke Street just three months after his hospital discharge. Two years later, at the age of 84, he poured a new cement floor at the old Northumberland Hook and Ladder Fire Company building at Front Street and Wheatley Avenue (now occupied by Wavelengths Hair Salon), and poured the floor of the Northumblerland Engineering and Construction Company building (he also plastered the walls, for good measure). That summer, when he discovered that he was no longer able to climb trees as well as he used to, he scaled back his workload and focused on small construction jobs. "Just to give me something to do," the 84-year-old told the Daily Item.

Sadly, Lewis Kile's health began to deteriorate after his brother, Russell, was killed in a car accident in the spring of 1967. On May 19, while a patient at Sunbury Community Hospital, he passed away after a brief illness. He was buried at Watsontown Cemetery, not far from where he was born in 1881.

In each and every small town, there are reminders of the colorful and eccentric citizens who have played a role in its history. Although he passed away more than fifty years ago, Lewis L. Kile's legacy lives on to this day; many of the sidewalks, foundations, floors, roofs and porches he constructed with his own hands still survive. But Lewis Kile will always be remembered best as the man who recovered Northumberland's giant ball of iron.