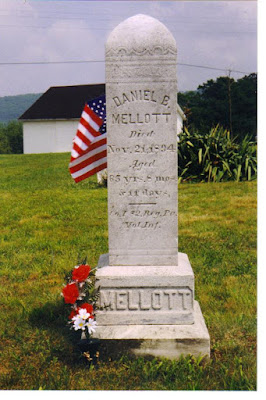 In April of 1875, the most sensational murder trial in the history of Fulton County took place. Charged with one of the most shocking crimes imaginable were Mary Mellott and her husband Daniel, a Civil War veteran who was known throughout Buck Valley as "Wolf Dan" on account of his disfigured face.

It was Valentine's Day of 1875 when the Mellotts left their simple frame house in Belfast Township to pay a visit to a friend, Mrs. Phoebe Clark, who lived a little more than a mile down the road. Before leaving home, Daniel Mellott fed three red oak logs into the fireplace, but noticed that one of the logs was too long. He remedied this situation with an axe, and then made sure that the fireplace tongs, shovel and poker were safely out of the reach of their children. Three of the Mellott children-- Edward, Anna and Martha, aged 2, 3, and 4 years respectively-- were left in the house until their return. At around four o'clock in the afternoon, Daniel and Mary Mellott set off for Mrs. Clark's house, taking their infant daughter with them.

They had scarcely traveled three hundred yards when Daniel stopped in his tracks and told his wife that they'd left a chair in front of the fireplace. He told his wife to stay there and wait while he returned to home to move the chair where it would be out of the reach of the three children.

Mary Mellott waited for her husband but, being under-dressed for the weather, decided to continue along the road to Mrs. Clark's house. Her husband managed to catch up with her before too long, however, and together they arrived at the Clark house shortly before 4:30. About a half hour later there came a knock at Mrs. Clark's door. Two local residents, Herbert Morgret and Stillwell Trueax, asked to speak to Daniel Mellott and, when he appeared, he was informed by Morgret that his home was on fire. "Where are your children?" asked Morgret.

"They are up the house," Daniel replied.

"They are burning up!" cried Trueax.

Daniel rushed outside, ran to the road, and peered off into the distance toward his home. He told the men they must be mistaken; it wasn't his house that was on fire. Trueax said, "It is your house, Mellott. I saw the smoke." At this, Daniel began to run down the road toward his home, but Morgret told him to get into his sleigh. Mellott obliged, but, frustrated by the leisurely pace, urged Morgret to hurry up.

"There's no point driving my horses to death," Morgret replied. "The children are already burned up by now."

Mellott jumped out of the sleigh, and ran to his house at full speed, reaching it several moments before Morgret and Trueax. He saw one of his neighbors, Adam Hess, who was the first Buck Valley resident to arrive at the scene. By this time, the structure was thoroughly engulfed in flames. Hess appeared ashen-faced and dumbfounded, and Mellott could tell by his expression that it was too late to save the children. "What am I going to do?" asked Mellott. Hess said that he did not know; from the looks of things, there wasn't much anyone could do. At this, Mellott broke down, threw his arms around Hess and said, "I want you to kill me."

Hess, who lived a third of a mile down the road, had noticed something was wrong at around 4:45, when he detected a strange smell in the air. Then he noticed smoke, and traced it to Mellott's chimney, which was belching flames. He reached the house three minutes later, but could see no flames except for those coming out of the chimney. When he tried to open the door it opened easily, but a sudden burst of fire and smoke prevented him from entering. Walking to the rear of the house, Hess discovered that the fire had already burned through the wall. It was at this point he summoned Morgret and Trueax, who were nearby on the road, and told them to find Daniel Mellott.

Daniel headed back to the Clark residence to break the news to his wife, meeting her on the road halfway. "They are gone," he said. Together they returned to the spot where their home once stood, leaned against the railing, and watched the fire consume the house. Mary sobbed mournfully, while Daniel could do nothing but stare at the flames.

The Mellotts received little comfort from their neighbors, and so they spent the night at the home of Mrs. Clark. Just after sunrise, neighbors began the gruesome task of collecting the bones and charred remains of the three Mellott children. The youngest of the children, Edward, was found tied in a chair just inches from the hearth stones of the fireplace.

The Arrest and Trial of Daniel and Mary Mellott


After the fire, several neighbors recalled previous statements made by the Mellotts that seemed to suggest that the fire may not have been accidental. Daniel had once told a neighbor that children were nothing but a nuisance, and his life would be better without them. It was also reported that Daniel had locked the windows and the door.

From these details, locals cobbled together a theory of what must have happened; after Daniel left his wife on the road and returned to the house, he tied his three children to chairs, sat them in front of the roaring fireplace, then locked them inside. A spark set fire to one of the children's clothing, and the blaze soon spread. Believing this theory to be correct, authorities arrested the Mellotts and they were taken to the McConnellsburg jail.

During the murder trial, the defense built their argument around the claim that Daniel, who was never the sharpest tool in the shed, so to speak, had a mental deficiency that was only made worse by his war injuries. With his disfigured face, it was a wise strategy to play for sympathy. Also helping his case was the fact that evidence didn't exactly support the claims made by those who sifted through the ruins the morning after the fire. While the prosecution claimed that Mellott had locked his children inside the house, Adam Hess-- who was the first to arrive on the scene-- had already told reporters that the door opened easily when he turned the knob. For all anyone knew, Hess could've committed the crime just as easily as Mellott. Or so could anyone else, for that matter. As for the theory that Mellott had strapped the three children to chairs, the coroner determined that only one child-- the youngest of the three who had been left home alone-- had been tied to a chair; the remains of the other two were found in the furthest corner of the room. Therefore, it was entirely possible that Mellott had tied the toddler into the chair as a safety precaution.

Since the evidence was purely circumstantial, and the tragedy very well could have been accidental, the jury had no choice but to acquit the Mellotts.

This decision did not sit well with residents of Belfast Township, of course. After the acquittal, public sentiment toward the Mellotts was so hostile that they were forced to flee the valley. However, it seemed that wherever they went, they were greeted with the same cold stares and bitter insults. They eventually settled in Bedford County, even though their reputation had preceded them.

A Pariah to the Bitter End


Just when it seemed that the world had forgotten about the tragic fire of 1875, Daniel Mellott once again found himself the target of public condemnation after the shocking death of another one of his children. By 1881, the Mellotts has moved back to Fulton County. That summer, Daniel gave one of his boys a coin to put in the Sunday school collection box. Instead of putting it in the box, the young boy pocketed the coin. When Daniel learned what the child had done, he punished him by dragging him outside and hanging him from a tree by the heels. A person who happened to be walking by saw the child hanging from the tree and cut him down, but the child died before the doctor could arrive.

In 1894, when a diphtheria epidemic raged through Fulton County, the Mellot family was not spared. The first to perish was 17-year-old Margaret, who succumbed to the disease on November 4. Her 6-year-old sister, Ella, followed her to the grave the following day. What emotional effect this may have had on the man known as "Wolf Dan" is unknown-- by this time six of his children had passed away-- but the dreaded disease claimed him next. On November 21, Daniel Mellott died in his Buck Valley home, a pariah to the bitter end.

Today, a shroud of mystery still surrounds the tragic fire. Generations of Fulton County residents have lived and died believing that Daniel Mellott was guilty of murdering his children, while generations have lived and died believing that he was innocent. At this point, only the Good Lord knows for sure, although my personal opinion is that he was judged too harshly by the locals. If one of his neighbors hadn't heard his offhand remark about children being a "nuisance", in all likelihood, the fingers of suspicion never would've been pointed into his face.

Mystery also surrounds the final resting place of the three young children who burned to death on that bitter cold Valentine's Day in 1875. There is no historical record to indicate where their remains were laid to rest, or if they were ever laid to rest at all.

Perhaps someday, if you are walking along Buck Valley Road, you may hear the sound of children wailing, or the sound of phantom horses drawing a sleigh through the snow, and if you do, then you will know that they are the sounds of lost souls trying to find their way home.