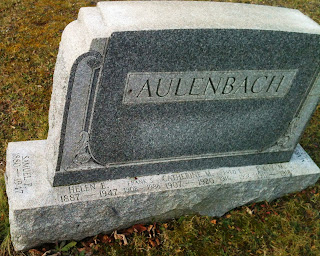 On a bitter cold day in January of 1947, a retired carpenter from Schuylkill Haven went berzerk and slaughtered his wife with a hatchet. What makes the tragic tale of Samuel Aulenbach strange is that, according to some, Samuel was a member of a fanatical religious sect. The motive is the greatest mystery-- what drove a quiet, respectable man to a senseless act of slaughter? Only the killer knew for sure, and he didn't live long enough to tell anyone about it.

Samuel and Helen Aulenbach lived in a comfortable home at 203 East Liberty Street in Schuylkill Haven, along with their 30-year old son, Fred. They had four other children, all of whom had respectable jobs and lived respectable lives. There was Meyer Aulenbach, who was a state trooper stationed in Doylestown; his brother Frank lived happily in Bethlehem. Two daughters of the Aulenbachs lived in the Pottsville area, and Fred, who shared the Liberty Street home, was employed as a fireman by the Reading Railroad. At the age of 66, Samuel Aulenbach had recently retired after a long career as a carpenter and struggled at times to adjust to the unemployed life. He filled his hours with and odd job he could find as a handyman, and he filled the rest of his time with religion. The only thing that could be said against him was that he was prone to bouts of overzealous excitement when debating and discussing Bible passages.

At around 3 o'clock on Saturday morning, January 18, Fred Aulenbach had just gone to bed after returning home from work. Both Samuel and his 60-year-old mother, Helen, were slumbering peacefully in their bed. By all appearances, it seemed like any ordinary night in the ordinary lives of ordinary people, but the world appeared to have been turned upside down while Fed had been sleeping. At around 10:00 in the morning, Fred's bedroom door creaked open, and he awakened to find his father approaching the bed with a hatchet in his hand.

Fred couldn't make sense of the bizarre scene, and before he could rub the sleep from his eyes he found himself struggling for his own survival. For reasons unfathomable, Fred's father struck him on the side of the head with the blunt end of the hatchet, and Fred, thinking quickly, disentangled himself from his bedsheets and tackled his crazed father. A savage scuffle ensued to gain possession of the weapon.
Despite his age, a lifetime of hard labor made the old man a formidable opponent, and the two men rolled from the bedroom down the stairs to the dining room, where Fred's eyes beheld a terrible sight. As he wrestled for his life, he saw the bloodied body of his dear, beloved mother lying in a pool of blood. She was still alive, groaning and gasping for breath, and Fred was suddenly faced with a horrifying decision. Would he be forced to take the life of his own father in order to save the life of his mother? Though he had been awake for only a few minutes, Fred had to make this life-altering decision in this awful split second of madness and mayhem.

Fred made up his mind, and rendered his father unconscious with a hard swift blow of his fist. With heroic composure he telephoned the family physician, Dr. T.B. Tihansky, and then he called Chief of Police Frank Deibert. Both men arrived in minutes, joined by County Detective Louis D. Buono. Helen Aulenbach, her head horribly mangled, was rushed to Good Samaritan Hospital, where she succumbed to her injuries eight hours later. Samuel Aulenbach was taken to Warne Hospital in critical condition, and one can only imagine Fred's emotions as it became clear that his father would never recover from the single punch Fred had thrown in that frightful battle for survival.

Helen's funeral took place inside the family home that Wednesday, where relatives remembered her fondly as a quiet, reserved woman with many friends. Thirty years of living in the neighborhood had made her well-liked and respected in her community. She was remembered as a proud mother and a loyal wife, and after the funeral she was laid to rest at Union Cemetery, in a silent and solemn ceremony where too many unanswered questions lingered in the air like wayward snowflakes that cold January morning. What had she said, what could she have done, to make Samuel's mind snap like a desiccated twig? If she had known about some secret struggle inside his tortured mind, it was a secret she had taken to her grave.

Only Samuel Aulenbach could clear up the mystery, but he was on the cusp of death with a fractured skull, felled by his son. And as for the 30-year-old son, Fred, he was confined to Good Samaritan, where he was being treated for multiple lacerations of the face.

Corporal William Keuch, of the Pottsville State Police barracks, was assigned to the case, along with county detectives Bruce Clayton and Louis Buono. Their investigation revealed that Aulenbach had been under a doctor's care for over a year, and that he had been unable to work because of his health. This seemed to suggest that Samuel, feeling impotent and useless, had grown depressed to the point of insanity. But there was another possible explanation for Samuel's madness. The investigation also revealed that, while Helen and other members of the family worshiped at St. John's Evangelical & Reformed Church, Samuel became of a member of a religious sect to which no other family member belonged. Was it possible that his frail mind had become corrupted by the teachings of a religious zealot? Unfortunately, by this time it was too late to ask; Samuel Aulenbach died at Warne Hospital without regaining consciousness.

The coroner's inquest into the deaths of Helen and Samuel Aulenbach was held at the Schuylkill Haven town hall on the evening of Tuesday, January 28, by Deputy Coroner Joseph F. Matonis. As expected, the verdict concluded that Helen had died from wounds inflicted by her husband, who died two days later at Warne Hospital. Despite his fractured skull, it was determined that Samuel's immediate cause of death had been lobal pneumonia. According to Dr. Tihansky, Samuel had also suffered heart failure during the tussle.

The inquest revealed that Dr. Tihansky had also diagnosed Aulenbach with senile dementia on January 13-- just five days before the murder-- and that he believed the retired carpenter had been mentally unstable when he attacked Fred and Helen with the hatchet. During Fred's testimony, he stated that he had been aware of his father's mental deterioration for months, but had seen no warning signs of violence. His voice broke and tears ran down his cheeks as Fred spoke of his father. Nothing was said of the mysterious religious order to which Samuel Aulenbach belonged, and the coroner's jury was satisfied that the tragedy had been nothing more than the result of a sick, old man who had simply lost his mind.

Gone Without a Trace

In April, it was announced that the Aulenbach home at 203 East Liberty Street would be sold at auction. A handful of families occupied the home over the years, but eventually it fell into disrepair and was torn down. Today, only a vacant lot remains where a murder house once stood-- which ought to be food for thought. Vacant lots such as this one on Liberty Street-- mere patches of grass between homes where happy children play-- dot the landscape of every town, big and small alike. There might be one outside your window right now. Yet we rarely give any thought to these empty spaces where builders refuse to build or where grass refuses to grow. Perhaps if these empty spaces could speak, they would tell tales of sadness and heartbreak and tragedy, of lives once lives and murder victims long forgotten.