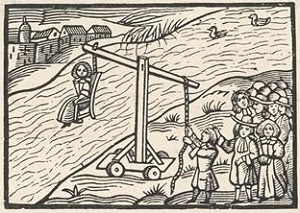 One of my favorite places to explore is the Stony Creek valley of Dauphin County. In spite of the immense size of this enchanting wilderness, it's only minutes from the hustle and bustle of Harrisburg. And while this rugged landscape may be beautiful to behold, one can't help but feel a certain sinister air while trekking through this valley. There's just something mildly unsettling in those dark hollows.

Of course, part of this region's sinister vibe may have to do with the locally famous natural feature known as the Boxcar Rocks (or Chinese Wall, as it is also known), where, it is said, ancient natives performed ritual acts of human sacrifice. From the top of the rocks, one can gaze down upon the eastern stretch of Stony Creek valley, into a vast region historically known as St. Anthony's Wilderness.

However, the uneasy feeling one sometimes gets while wandering through the valley may also have to do with the area's history of witchcraft. In the 1870s and 1880s, witchcraft was practiced by dozens of families who settled in the Stony Creek valley, as well as the adjacent Fishing Creek valley.

One of the most famous incidents pertaining to Dauphin County witchcraft was the bewitching of a girl named Emma Kildey, which first occurred in 1877 and continued for a period of three years.

Mrs. Boyer, by all accounts was an industrious German woman, married to a hard-working railroad man. When William Kildey, a river pilot and prominent citizen of the valley, accused Mrs. Boyer of bewitching his daughter, it became the hot topic of conversation all over Harrisburg, culminating in a bizarre court hearing held at Fort Hunter.

The preliminary hearing took place at Fort Hunter on March 30, 1880 in front of Squire McAllister. Shortly after 2 o'clock, the first witness was called; it was William Kildey, the father of the bewitched young girl. Under oath, he gave his version of the story. According to Mr. Kildey, three years earlier his daughter Emma fell ill, and he tried all the physicians in the neighborhood without getting any relief. He heard of an astrologer in Harrisburg named Wolf, who told Mr. Kildey that his daughter was bewitched. Meanwhile, the girl's half-sister paid a visit to a Dr. Moulson in Harrisburg. She said the doctor instructed her to look into a bucket of water, where she would see the reflection of the face of the witch who had caused her half-sister's malady. The face of the witch was old Mrs. Boyer, who also happened to be the stepmother of John Boyer, the prosecutor of the case.

Mr. Kildey then sought out a chip peddler and alleged witch doctor from Fishing Creek known as Armstrong M'Clain. Accompanied by a neighbor named Samuel Bell, the two men paid a visit to M'Clain, who pronounced that the daughter was "punished by the evil one". The witch doctor promised that he would break the spell and that the young girl would be restored to health by sunset. He also told Mr. Kildey that he would come by in the morning to give his daughter some medicine.

Much to their surprise, when Kildey and Bell returned home at sunset, Emma appeared to have recovered from her illness. The following morning Armstrong M'Clain arrived at the Kildey home and gave the girl medicine. After three visits from the witch doctor, who was paid five dollars for his services, Emma Kildey was pronounced cured, and she remained in good health until the spring of 1879.

Again they fetched M'Clain, who examined the girls and concluded that she was once again bewitched. Mr. Kildey placed the blame on a Stony Creek schoolteacher by the name of John B. Black. Kildey claimed that the teacher had turned the girl over to the wife of John Boyer to kill her by witchcraft. M'Clain once again administered medicine, and once again she was cured. However, in January of 1880, the daughter of William Kildey fell ill once more and M'Clain gave her more medicine, adding that if she fell ill again there was nothing more he could do.

Mr. Kildey claimed that this last attack on his daughter occurred while she was traveling to a wedding and passed in front of Mrs. Boyer's house. Mrs. Boyer allegedly confronted the girl on the road and began cursing at her in Pennsylvania Dutch. Mr. Kildey claimed in court that his daughter fell ill the next day. He then told Squire McAllister that Mrs. Boyer appeared on his daughter's bed the night before the hearing and said, "I have her now, and I will keep her!"

Squire McAllister, who did not believe in witchcraft, asked Mr. Kildey if he actually expected him to buy such a nonsensical story. After all, this was Pennsylvania of 1880, not Massachusetts of 1680. Surely, only a fool would believe in such outdated superstitious nonsense. But Mr. Kildey was solemn in his conviction, replying:

"Squire, I firmly believe that Mrs. Boyer is a witch-- that she bewitched my daughter-- and I have spent nearly all my means in the past three years to have her cured."

He also added that a young man who had attempted to seduce his daughter had turned him over to Mrs. Boyer to be tortured after the girl rejected his advances.

The next witness called to the stand was Ferdinand Dewalt, who stated:

"I don't believe in witchcraft. These reports about Boyer, who works under me on the Reading Railroad, have been a great injury to him. The idea that his wife is a witch makes people avoid him... I told Boyer he had better stop for a few days and go to Squire M'Allister's and have a suit brought to try and stop the talk. John (Boyer) went to see Kildey, who told me my little daughter did not die a natural death. Kildey added that he believed (the) Boyers had killed their own child by witchcraft."

The next witness was the Stony Creek schoolteacher, John B. Black. Black stated:

"I taught school in Stony Creek valley, near the residence of the Kildeys. About the 10th of April, 1879, Mr Kildey's son George asked me if I would not go to their house. I inquired, 'What for?' He replied, 'Emma is very sick and mother and father think she is bewitched again, and want you to go for M'Clain, the witch doctor, or stay until father would go.'

"I went to the house and found the girl in a rocking chair, propped up with pillows. I said, 'Emma, I'm sorry you are sick. What's the matter?' She said, 'The old complaint". The father and mother excitedly added, 'it was that devil, Mrs. Boyer, had bewitched her again' and they expected M'Clain to cure her. The father went for M'Clain, who came about 10:30 AM. The father wanted M'Clain to relieve the girl at once. M'Clain said it would take time. The fater said, for God's sake relieve her now, for she has suffered enough to kill two horses. To this M'Clain said, 'Well, I can do it'.

"He then took out of his pocket a bundle of papers containing herbs, roots and white powder. He filled a bottle with water, adding the herbs and powder. He asked for an old hammer, and got it, and then went out of doors and returned in fifteen minutes, approached Emma and said, 'Now I will kill the witch'. I inquired 'who is she?' He replied, 'Mrs. Boyer'. He took the hammer, drew back as if to deliver a heavy stroke, and then touched her three times on the right temple very lightly. M'Clain then went out with the hammer and returned in about ten minutes, saying to Mrs. Kildey, 'If your spotted cow kicks when you go to milk her tonight , don't abuse the cow,' adding, 'I have settled Mrs. Boyer and she will die.' He said further that he had settled old Mrs. Boyer, and she had bursted open the coffin when they were burying her."

Mr. Black said he then asked M'Clain whether he really had done that, and he replied, rather emphatically, "I done that!"

Mrs. Gordon was the next witness, and said that Mrs. Boyer had bewitched Emma. "Emma told me so this day," she testified. "I often seen M'Clain thus to cure the girl. Emma asked me to send M'Clain to her this morning, as Mrs. Boyer tormented her."

At this point in the hearing Armstrong M'Clain turned to Squire McAllister and asked "what he should do about it." The squire replied that he had better consult his attorney, cautioning him that may be in for some big legal trouble. Squire McAllister asked Mrs. Gordon how Emma Kildey behaved during her spells. She replied:

"She makes noises and faces like a cat and dog, and talks Dutch, a language of which she has no knowledge."

Mrs. Gordon also said that the Kildeys told her that if the girl got well Mrs. Boyer would have to die, because if Mrs. Boyer lived, the girl would be tormented all her life.

Samuel Bell, a neighbor of the Kildeys, was next to testify. He recalled M'Clain saying that the one who bewitched the girl shall die in seven months. M'Clain admitted to making this statement, and Squire McAllister put the witch doctor under bonds for $500 to appear at the Dauphin County courthouse for trial.

It appeared that Harrisburg, Pennsylvania, was about to become the scene of America's last great witchcraft trial-- but the case never came to trial.

After the preliminary hearing, things got worse for Emma, who claimed that the ghost of old Mrs. Boyer continued to haunt and torment her. The manifestations became too much for the family to bear and they moved away. The case was dismissed, and the final chapters of Emma and the rest of the Kildey family have been lost to history.