Most of us don't know anyone who has been personally struck by lightning, and that's because people just don't get struck much by lightning anymore. If you're like me, however, and enjoy reading old newspapers, you've probably noticed that just a century ago, people seemed to be getting killed by lightning left and right.

There are probably several reasons for this; for starters, weather forecasting was a crude and primitive science in those days. There also weren't as many tall structures a century ago as there are today, and the booming mining and timber industries left a whole lot of Pennsylvania out in the open, without many tall trees for lightning to strike. Or maybe people back then were just walking around with more metal objects strapped to them. Or maybe folks back then ate a diet that was very rich in iron. Who knows. I'm a historian, not a scientist.

One particularly strange event took place in the summer of 1918 which shows just how dangerous thunderstorms could be back in the old days. On July 24, 1918, a severe storm rolled through the Coal Region, and by the end of the afternoon, four unfortunate children-- all of them under the age of fifteen-- had lost their lives after being struck by lightning.

Three girls from Ashland-- Ruth Krum, Mary Young and Catherine Price-- were swimming in the lake at Fountain Springs Country Club when the storm approached. Despite the rumblings of thunder and the flashes of lightning, they refused to leave the water. The girls were standing on the diving board, and just after Catherine dove into the water, a bolt of lightning made a direct hit on the diving board. Catherine was under water when the lightning struck, but the bolt had been so powerful that she was temporarily blinded and deafened. When she came to the surface, she was horrified to find that her friend, Mary, was floating in the lake in the vicinity of the beach, with her head under the water.

Catherine, still stunned by the bolt, fumbled and crawled along the shore until she reached the dam, and made a valiant effort to retrieve Mary's body by dragging her out of the water by the hair. Frantically she attempted to revive her friend, but when she saw that it was a lost cause, she ran up the hill to the club house, where an ambulance was summoned from the Fountain Springs Hospital. Two doctors and a handful of assistants raced to the scene, but once they realized that Mary was beyond revival, they stripped off their clothes and jumped into the lake to search for Ruth Krum. She was eventually located in twelve feet of water. The bodies were then transported to the hospital.
At the hospital, an examination revealed that neither of the victims had water in their lungs, which meant they were dead before they fell from the diving board. Ruth's hair had been singed, and Mary's body bore a clearly visible imprint of Ruth's hand on Mary's chest. 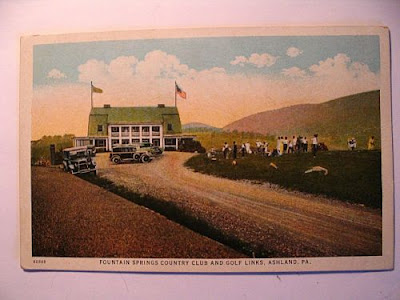 Meanwhile, just a few miles away in Kulpmont, a mother was grieving the loss of two of her sons. Milla Klapps, along with her young boys Salvatore and Jerry, were out in the woods picking huckleberries with a friend, Michael Vinarchick, when the sky darkened. Mrs. Klapps, putting maternal instinct ahead of common sense, made the fatal mistake of finding shelter beneath a tree. Salvatore and Jerry were killed instantly by the lightning strike, while Mrs. Klapps and the Vinarchick boy were rendered unconscious. There were many other people out in the woods that day picking berries, and after witnessing the tragedy they raced to Scott Colliery and called for an ambulance, and all four victims were taken to Shamokin Hospital.

Moments later, Scott Colliery was also struck by lightning, but a quickly-organized bucket brigade managed to extinguish the fire before any damage could be done. Lightning also struck the Kulpmont homes of J. Gottchall and Frank Savitsky, causing a fire to break out. By the time the flames were extinguished the house was left without a roof, all the furniture ruined by the rain.

The powerful storm rained destruction upon the villages and mining patches across the Coal Region that fateful day. The storm was so powerful that it was even felt underground; in Excelsior, lightning struck the top of the Corbin Colliery, and the electricity traveled five hundred feet below the surface along a metal rail, stunning three miners, one of whom was initially reported as dead (though he later recovered).

In Shamokin, lightning struck the Reformed Church, causing slight damage, though hail caused significant damage to other homes and property in the city. In Elysburg, acres of crops were flattened by the hail, and several bridges and roads throughout the region were washed out by the rain.