The Mystery Coffin of Loyalsock Creek 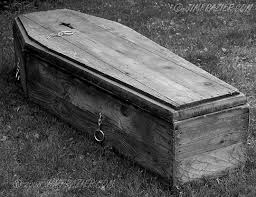 A very unusual story which appeared in the Bloomsburg Columbian on April 24, 1902:

A mysterious, well dressed stranger arrived at Montoursville on Thursday and offered to pay Sheffer & Son, undertakers of that town, $200 if they would take a coffin twenty miles up Loyalsock Creek and bury it in a secluded spot to be designated by him.  The only provision that he required was that they sign an agreement to bury the coffin without opening it and ever afterward keep the matter a secret.

He said the coffin would arrive from St. Louis and that it was to be met at the train and immediately conveyed to the chosen place of burial without further question.

The undertakers declared they would not bury a coffin unless they knew what it contained.  The stranger was apparently much perturbed when he found his proposition was not accepted.  He then declared that if the strictest secrecy was promised he would withdraw the stipulation that the coffin should not be opened if they would agree, after having seen what it contained, to bury it in accordance with his directions as previously outlined.

When this proposition was also spurned the stranger immediately disappeared after a visit to the telegraph office.

I can't help but wonder who or what was in that mysterious coffin from St. Louis.  A buried treasure?  The body of a murder victim?  The remains of Bigfoot or a space alien?  The mind races at the possibilities... well, mine does at least.  While the undertakers from Montoursville might not have granted the stranger's odd request, perhaps other local undertakers took the stranger up on his offer to bury the mystery coffin twenty miles up Loyalsock Creek, which, if my calculations are correct, would be a few miles south of Forksville, in Sullivan County.
Labels: Lycoming County odd news Sullivan County