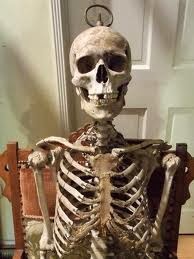 For most people, finding a dead person inside your chimney would be cause for great alarm.  However, based on the nonchalant tone of the following newspaper article, from the April 19, 1884 edition of The Carbon Advocate, one might assume that finding a corpse in your home was rather commonplace (maybe it was back in those days).  The story is described in one brief paragraph:

A Skeleton Found up a Chimney

O.B. Fackenthal had men engaged in tearing down the chimney and inner walls of an antiquated house at Springtown, Bucks county, Saturday, to make some improvements.  A human skeleton was found embedded in a flue.  Rumor has it that dark deeds were transacted in this house and the supposition is that this skeleton was a subject of one of the melees.  During the Revolutionary War, the house was a noted resort, being once used as an inn.  At the close of the war of 1812 a number of soldiers, returning from the army, lodged there.  They became involved in a fight the next morning, after drinking considerably, in which several were killed.  In one of the rooms sword thrusts and bullet marks can be seen in the frame work.