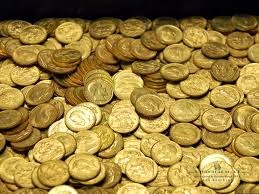 From the September 17, 1897 edition of the Pike County Press:

Adam Uhl, of Greeley, sends to the Press an account of a rare find of coins made by Earnest Goetz, a prominent young man, while working on the road at that place.  They were: A five franc piece, dated 1821; a Spanish coin, dated 1809; two United States 25 cent pieces, one dated 1832, one dated 1835, and a Spanish piece, dated 1777. The pieces were found under an oak stump standing along the road which it was desired to remove and on starting to dig under it they rolled down the bank.  There were 5 silver coins and two of copper.  When and by whom placed there and for what purpose can only be conjectured.