A graveyard of stillborn children 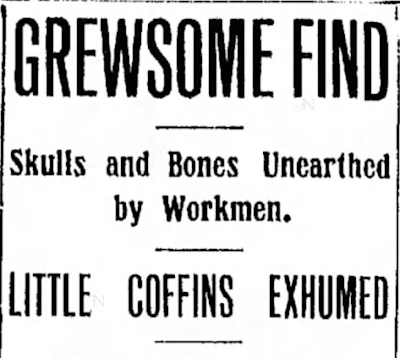 You never quite know what you may dig up while building a new house, as this following newspaper story demonstrates. From the Lebanon Daily News on May 1, 1905:


Workmen, while making excavations for a new house at the corner of South alley and Partridge avenue, this morning, unearthed two small rough coffins, which are supposed to contain the skulls and decayed bones of three bodies. The coffins as found are really only old wooden boxes and their rotten condition would indicate that they had been in the ground for many years. The find attracted considerable attention, and the exaggerated stories set afloat soon aroused Coroner A.B. Schultz and Deputy Coroner C.D. Weirich, who promptly made an investigation.

One box, when opened, was found to contain two tiny shells about as thick as paper, which, it is believed, were the backs of two skulls. Some ashes in the box were thought to be the crumbled bones of rudely buried corpses. The other box contained even less to identify as bones and indeed there was so little in both boxes that had not they remained in position no one would have even suggested that bodies had been interred there. The position of the little caskets and the shape all suggested too plainly, however, that the rear yard had been used for someones private burial ground and the remains were reinterred elsewhere as tenderly as if the entire skeletons had been found intact.

The Coroner and his deputy are inclined to believe that the remains are those of stillborn children and were quietly buried, as was the custom years ago.

It being impossible to tell the condition of the boxes when they were interred, they may have been underground for 25 or 30 years. Some who saw the boxes, however, say that the burial must have been made at a more recent date.

The excavations are being made by William Rapp, who will build a pair of houses on the lot. The premises changed hands a number of times during the past several years and there was no way by which the matter could be traced, so the Coroner decided that no inquest would be necessary.
Labels: Lebanon County