Pottsville woman shoots herself while guarding against ghosts 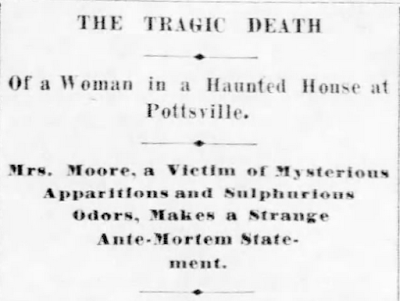 An unusual story from the Pittsburgh Daily Post, December 1, 1882:


POTTSVILLE, November 30.-- Mrs. Thos. Moore, of Lac Gap, died to-day from the effects of a wound inflicted personally by herself yesterday morning while in bed. Eight months ago her husband, who was then employed as a night watchman at Spring Colliery, began to imagine that he was haunted by spectres and weird and mysterious forms. So confident was he that he saw these objects that he repeatedly fired a pistol at the ghostly visitors.

He said nothing to his wife of the matter until quite recently. At her request Moore obtained day work and the apparitions disappeared until within a few weeks ago when Mrs. Moore claimed that she was haunted as her husband had been, and that ungainly spectres and phantoms prowled around their house both day and night. This time the apparitions were accompanied by sulphuric odors.

Mrs. Moore invited a number of her neighbors to her home and they all positively declare that the building was permeated with the smell of sulphur and that at night thin columns of blue vapor whirled and twisted in and out of the various rooms.

The neighbors, however, were not able to see the alleged spirits in a materialized form, although both Mr. and Mrs. Moore declared that this questionable privilege was granted to them. Like her husband, Mrs. Moore armed herself with a stout revolver, and frequently she would blaze away in the air, with the intention of shooting some of the haunting phantoms.

Last night, it is claimed, the spirits visited the unhappy couple in strong force. During the early part of the evening they run in and out of the house at will and, according to Mr. Moore, kept both him and his wife in a restless state of bewilderment. Finally, worn out completely by their ineffectual attempts to kill the phantoms with their pistols, the husband and wife retired for the night.

Shortly after 1 o'clock this morning Mrs. Moore was aroused by strange sounds proceeding from the room adjoining the one in which she was. Jumping from her bed she started forth, pistol in hand. She made a prolonged search, but her efforts to discover who or what it was that disturbed her rest proved unavailing. Then she returned to her bed by her husband's side, retaining possession of the pistol. She slept for some time, but towards morning she started up from some terrible dream, the pistol exploded and the ball entered her left side between the seventh and eight ribs, inflicting a fatal wound.

A few minutes before she died the unfortunate woman made an ante-mortem statement, detailing the facts as they have been stated. She leaves six children. She was of German parentage.
Labels: ghosts Schuylkill County