A baby's skeleton, an armless fruit vendor and a Pottsville mystery 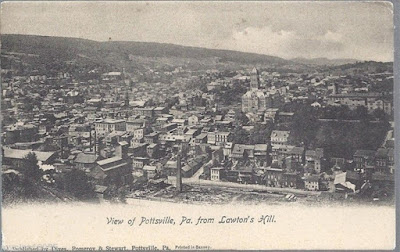 At the north end of North George Street in Pottsville, just a few hundred yards from Nativity BVM High School in the part of town known informally as Lawton's Hill, once stood the home of John Weaklem, invariably described in late 19th century records as the "armless fruit dealer of Norwegian Street". In Weaklem's back yard once stood a pear tree, where the body of an unknown infant was hastily buried in 1894, and records suggest that the remains of this unfortunate infant are still there today, in an unmarked grave.

As to the identity of this child, and the cause of death, these facts still remain an unsolved Schuylkill County mystery to this day.

What little facts we do know are these: John Weaklem first learned of the matter from Deputy Coroner James J. Clemens, who had been informed of the burial by Weaklem's son, Al, and his wife.
Weaklem had shared his home with his elderly mother and a daughter named Clara, who filled the role of Weaklem's housekeeper until October of 1893 when she moved to Philadelphia. Since the handicapped fruit seller was unable to take care of domestic matters on his own, his son and daughter-in-law moved into the Weaklem house at 341 George Street.

One day, Al's wife (who was also named Clara, incidentally) was looking for a shirt and began rummaging through the bedroom that was formerly occupied by Clara Weaklem. She noticed an offensive odor coming from the dresser and she brought the matter to the attention of her husband. Upon further investigation, Al and his wife found that the foul smell was coming from a bundle of cloth in one of the dresser drawers. They untied one end of the bundle and found the bones of an infant. All of the flesh had been eaten away by worms, which were also still inside of the bundle. Horrified by their discovery, they immediately took the bundle outside and buried it in the garden beneath Mr. Weaklem's pear tree.

They never told Weaklem what they had done, because the incident surely would have put the spotlight of guilt upon Clara. However, Al and his wife felt obligated to report to the matter to the authorities.

When Deputy Coroner Clemens visited the house on George Street and questioned Mr. Weaklem about the dead infant, he was overwhelmed with grief and shame. Although he claimed to know nothing of the matter, the news was a devastating blow. Could this have explained why his daughter Clara, now estranged to him and the rest of the family, had packed up in the middle of the night and ran away to Philadelphia three months earlier?

Even Deputy Coroner Clemens was saddened by the strange turn of events. As a merchant, Weaklem was one of Pottsville's most beloved and respected citizens. In spite of his handicap, he worked tirelessly to support his aged mother and to raise his children to become responsible, upstanding members of society. And now the Weaklem name risked being tarnished by this gruesome, baffling tragedy.

Although an investigation was made, from the state of the remains it was impossible to tell whether or not the child had been dead or alive when it was born, or when it was tied up into a bundle and hidden in the dresser drawer. Weaklem stated that he didn't even suspect that Clara was pregnant or romantically involved with anyone. He knew nothing of her whereabouts, other than that she had gone to Philadelphia, and she had not made any effort to contact him. The authorities attempted to track her down, but came up empty-handed.

Faced with a dilemma, Deputy Coroner Clemens ordered the remains to be left undisturbed, and, to the best of anyone's knowledge, that is where they still remain to this day-- on a hilltop in Pottsville inside an unmarked grave.


Did you enjoy this article? If so, then pick up a paperback copy of Pennsylvania Oddities, which features even more true stories of the strange from around the Keystone State, as well as more in-depth versions of some of the more spectacular stories shown on this blog. Only $14.95 and free shipping is available!
Labels: Schuylkill County unsolved mysteries