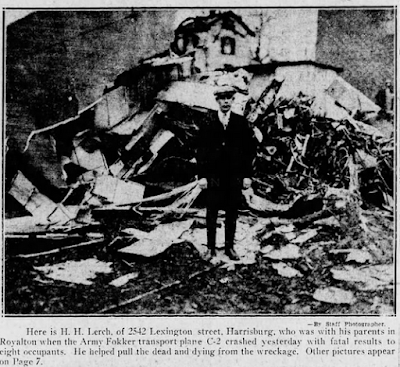 One of the saddest aviation disasters in Pennsylvania history occurred in the Harrisburg suburb of Royalton on the afternoon of January 11, 1929, when a Fokker C-2 cargo plane crashed shortly after taking off from the Middletown Air Depot.

Opened as a supply depot for U.S. Army Signal Corps aircraft in 1917, the Middletown airfield served as an important support installation to the Air Force for several decades, and was reborn as Olmsted Air Force Base in 1948-- a name that endured until the base was closed down in 1969.

While several accidents involving military aircraft have taken place near Middletown, the crash of the Fokker C-2 was the deadliest, claiming the lives of eight soldiers.

It was shortly after 1:45 on a bitter cold Friday afternoon when Lieutenant Henry Robert Angell assumed command of the plane, which had arrived at Harrisburg earlier that morning from Bolling Field in Washington, DC, with Captain Harry A. Dinger at the helm, in order to load up with supplies. Captain Dinger then took off in an amphibian plane for Washington with a sergeant by the name of Mayland, believing that the C-2 was following closely behind. He did not receive word that Lieutenant Angell's aircraft had crashed until he landed at Bolling Field.

One of the strange details of the disaster is that Lt. Angell and Capt. Dinger flipped a coin in order to decide who would fly the cargo plane back to Washington.

According to witnesses on the ground, the C-2 failed to gain altitude after takeoff, and dove nose-first into the ground, narrowly missing several houses and crashing with a thunderous explosion in a vacant Penn Street lot adjacent to the Royalton post office and the Guy Vogt meat packing plant. A local resident, Frank Geisinger, said, "I saw the plane start out and everything seemed to be going all right when suddenly it seemed to buckle, and then it fell, turning over and over several times."

Airfield officals and rescue crews, led by army doctor J.F. Blecker, raced to the scene, but only found confusion among the wreckage and crushed bodies. Although the pilot had managed to survive, five of the passengers were killed instantly, and because the soldiers had come from Bolling Field and were unknown to the men at Middletown, identification proved difficult. "They were strangers to us," said Captain Frederick S. Christine, commander of the Middletown Air Depot. "Just landed here this morning and we hardly knew any except the officers."

Three of the crewmen, including Lieutenant Angell, were rushed to local hospitals. Angell was transported to Harrisburg Hospital with several broken bones and severe head injuries. Dr. Kunkel, who examined the pilot, found that Angell had broken more bones than he could count.

Miraculously, but perhaps cruelly, Lieutenant Angell never lost consciousness, and after he had been cut out of the cockpit with an axe and carried to a waiting ambulance, he implored the driver to kill him in order to extinguish his agony. "Shoot me. For God's sake, shoot me," cried the pilot to Charles Sheaffer, who rode with the injured airman to the hospital. 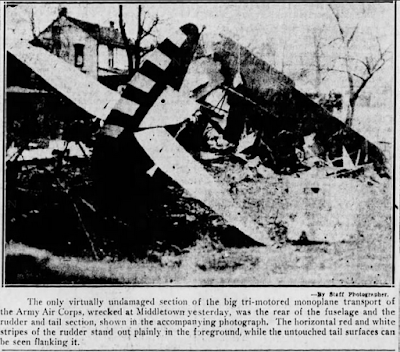 "The screams coming from the plane were terrible," recalled Royalton resident Carolyn Holland. "The rescuers who reached the scene just a moment before I did had a terrible time getting the passengers out. One man, I think it was the pilot, was in terrible agony... his legs were evidently broken and one of his feet was almost off. He seemed to want to die."

Angell succumbed to his injuries within the hour, however, and his co-pilot, Mike Kelly, would die of his injuries two minutes later. By four o'clock that afternoon only one of the men who had climbed aboard the cargo plane would still be among the living; Sergeant Patrick Conroy, a native of New York City. As the only surviving witness, aviation officials hoped that Conroy could tell what had gone wrong, but that spark of hope was extinguished when Conroy arrived at the hospital without a pulse. It was soon evident that he would never recover.

That the cargo plane should crash at all mystified officials; mechanics had given the plane a clean bill of health immediately before takeoff, and when it came to the Fokker C-2, the mechanics at Middletown knew the aircraft better than anyone. Just days earlier, a modified Army Air Corps Fokker C-2A intriguingly named "?" (referred to simply as "Question Mark") shattered world records in several different categories during a 150-hour nonstop flight. It was the aviation mechanics at Middletown Air Depot who had outfitted the plane, allowing it to make numerous successful in-flight refuelings during its six days in the air.

This is just another strange detail surrounding the Royalton tragedy; the same mechanics who worked on the C-2A that stayed aloft for 150 straight hours from January 1-6 also worked on the C-2 that could not stay aloft for more than 60 seconds on January 11, even though the planes were virtually identical.

The five crewmen who died at the scene were identified as Master Sergeant Joseph B. McCarthy and Staff Sergeant Rudolph Lehutta, both of Washington, DC, Staff Sergeant Henry Cronan of Tacoma Park, Maryland, Private Samuel B. Jones of Bellbuckle, Tennessee, and Private Clarence Birch of Chicago. Lieutenant Angell, a native of Birmingham, Alabama, died shortly after his arrival at the hospital, as did co-pilot Mike Kelly. Five of the eight victims are buried at Arlington National Cemetery. Kelly is buried in Frackville, Schuylkill County.

Meanwhile, in a hospital room in Washington, a 24-year-old army nurse struggled frantically to pull herself out of bed. Charlotte Bucker, bedridden for five days with tonsillitis, had just gotten word that her fiance, Patrick Conroy, was clinging to life at a hospital in Harrisburg. In spite of her weakened condition, she returned home and rummaged through her closet until she found her prettiest hat, and the blue dress that her fiance loved so much. She knew that Pat would never regain consciousness, but she wanted to look nice for him, just in case the Lord decided to deliver a miracle. She then raced to the railroad station and caught the first train to Harrisburg.

Sadly, her efforts were in vain; Patrick Conroy died ten minutes before she arrived. Their wedding had been planned for the following month. Charlotte, overcome with grief, collapsed. She returned to Washington the following day, the few hours she had spent as a stranger in a strange city would be etched into her memory until the day of her own death in 1960, at the age of 55. She never married.


A Gruesome Record and a Lasting Legacy


At the time of the crash, the tragedy at Royalton entered the history books as the deadliest aviation disaster in American history up to that point, surpassing the crash of a Ford tri-motor transport aircraft in Texas that claimed five lives the preceding year. This was still the era of single and double-seated airplanes, and transport planes were a new invention. As a result, the tragedy was covered by newspapers around the world, which allowed numerous aviation experts to weigh in on the matter. 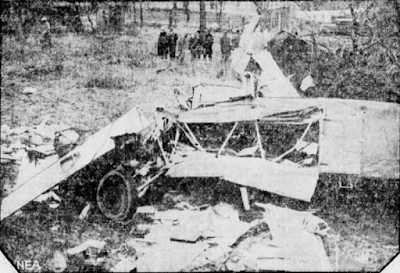 The prevailing theory as to what caused the crash was that the cargo inside the plane's fuselage had shifted during takeoff, and when Angell attempted to make a correction, the cargo shifted once again-- this time in the opposite direction-- causing 15,000 pounds of cargo to pile up on top of the crew. Although it has never been proven, it is possible that some of the men sustained fatal injuries before the Fokker C-2 even crashed into the earth. The official U.S. Army report, however, claims that the plane's left outboard engine failed (mechanics at Middletown strongly disputed this claim). At any rate, losing one of the three engines probably would have caused the cargo to shift anyway, and the statements made by numerous witnesses stating that the plane suddenly took a nosedive seem to support the shifting cargo theory.

While it may seem like common sense today, the cargo carried by transport planes in 1929 was not secured or strapped down; neither was the cargo weighed before being loaded onto the plane. Since transporting cargo by air was uncharted territory, nobody ever thought of taking these things into consideration. Other experts speculated that the C-2's three 220-horsepower engines were just not powerful enough for the job.

The crash at Royalton ultimately led to improvements that have undoubtedly prevented similar aviation disasters. The Fokker flown by Lieutenant Angell was one of eleven built for the U.S. Army Air Corps (three C-2 transport planes were built in 1926,  and eight C-2A planes were built in 1928. The only difference between the two variants is that the C-2A had a slightly greater wingspan). After the crash, Fokker recalled the C-2As it had built in 1928 and replaced the 220-hp Wright J-5 radial piston engines with Wright J-6-9 radial piston piston engines, which supplied 330-hp each. These modified cargo planes were re-designated C-7. By 1931, all new production models were fitted with 300-hp engines and redesigned with larger wings and vertical fins.

Did you enjoy this article? If so, then pick up a paperback copy of Pennsylvania Oddities, which features even more true stories of the strange from around the Keystone State, as well as more in-depth versions of some of the more spectacular stories shown on this blog. Only $14.95 and free shipping is available!
Labels: Dauphin County plane crashes