A Reynoldsville Murder-Suicide: The Chilling Crimes of Frank Chiffin 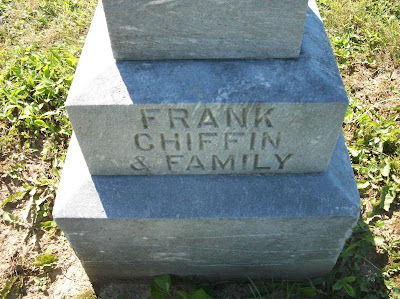 Located about seventy-five miles northeast of Pittsburgh, Reynoldsville is a small, quiet town which hasn't seen much excitement since the 1920s, when a handful of factories and silk mills attracted workers to the tiny borough and caused the population of Reynoldsville to peak at over 4,000 residents. The town's largest employer was the Reynoldsville Silk Fabrics Corporation, which operated a silk mill at the western end of Third Street, on the banks of Sandy Lick Creek. At its peak, the silk mill employed 150 men and women, and the silk woven in Reynoldsville was used in the manufacturing of umbrellas and neckties.

About two hundred yards from the mill, at the corner of Jackson and Third streets, lived Frank and Gertrude Chiffin, along with their five daughters. Frank also had a 21-year-old son named John, who also worked at the silk mill. In the summer of 1928, Frank Chiffin was employed at the mill as a fireman and night watchman. The close proximity between the mill and the Chiffin home allowed the 55-year-old watchman to keep tabs on his family. He kept a particularly close watch on his wife, who was fifteen years younger and said to be quite attractive, and before long Frank Chiffin began to suspect that Gertrude was having an affair.

Of course, it was impossible for Frank to keep his eyes glued to his house at all times and, according to those who worked at the silk mill, Frank would make frequent trips to his house just to be certain that everything was in order. One co-worker, a neighbor named Thomas Brachan, claimed that Chiffin would leave his job every thirty minutes just to run home and check on his wife. Over time, as his jealousy grew, his behavior became increasingly alarming. He nailed shut the front door of his home and nailed shut every window, just be certain that no one could enter or leave the house without his detection. This left only one door, which he could easily watch from his post at the silk mill.

Unfortunately, not even these actions could ease Frank's wild suspicions. What if Gertrude was sneaking a gentleman caller into his home while he was eating his lunch, or using the washroom? Frank decided that he needed to devise some sort of security alarm, to alert him whenever somebody entered or exited his home. He kept three dogs chained near the one door he hadn't nailed shut so that their barking would attract his attention. This seemed to keep his jealousy at bay for a while, until he was struck by a gut-wrenching revelation-- at some point, the dogs would be so familiar with Gertrude's alleged gentleman caller, that they would no longer bark! This revelation filled the jealous watchman with dread.

For months, Frank Chiffin would leave the mill and race home whenever he heard the dogs barking, only to find that his home had been visited by a mail carrier, the milk delivery man, or a neighbor. He would return to his job satisfied that his wife was on her best behavior. But one day, the dogs stopped barking.

By the spring of 1929, everyone around Reynoldsville had become convinced that Frank Chiffin's jealousy had driven him to the brink of insanity, but few could have predicted what he would do next. It had been a cold, harsh winter and he didn't worry too much about Gertrude fooling around. If she had decided to leave the house, or if a young man had come visiting, he could've seen their footprints in the snow. But now it was April and all the snow had melted. Spring was in the air, and although Frank wasn't keen on poetry, he might've remembered the words of Tennyson:

For several days in April of 1929, Frank holed himself up in a downstairs room in his house, grinding and polishing the blade of an axe to a razor-like edge. Early on the morning of Thursday, April 4, Frank crept up the stairs to his bedroom, where his wife lay sleeping in same the bed with Jennie, their ten-year-old daughter. Another daughter, eight-year-old Josephine, was asleep in a small bed in the same room.

No one knows how long he watched Gertrude, or what he might've whispered, before he committed his gruesome crime. It was around 3:30 in the morning when Gertrude's terrified screams awakened the children, but by the time the other Chiffin children reached the bedroom it was evident that Gertrude was beyond help; the first blow from the axe and nearly severed her wrists, indicating that she was awake and had tried to protect herself when her husband began his vicious attack. The second blow landed just below the nose, nearly splitting her head in two, and the third blow struck her in the throat, nearly severing the head from the body. With her last desperate moments of life, Gertrude managed to rise to her feet, but collapsed at the foot of the bed.

Frank Chiffin was now standing over the body, with his bloody axe raised high overhead. Two of his daughters threw their arms around his neck, preventing him from striking their dying mother once more. He brushed them aside and then took a closer look at what he had just done. He ran from the room and ran downstairs, and a moment later a lone gunshot awakened the neighbors and brought police to the scene.

Frank was still alive when the authorities arrived, but barely. He died from a self-inflicted gunshot wound to the right temple, his left hand clutching a crucifix. One of the Chiffin daughters, who had followed her father downstairs, testified at the coroner's inquest, and said that, after slaughtering her mother with a lumberman's axe, her father had gone downstairs and grabbed the crucifix from the wall. She watched him kneel, presumably in prayer, and as he held out the crucifix in one hand, he pressed the nose of a .38-caliber revolver to the side of his head and pulled the trigger. The murder had obviously been premeditated; not only had Frank Chiffin spent considerable time preparing his axe, but had left a handwritten note-- a crudely scribbled last will and testament-- instructing that his property be divided equally among his children.

Authorities questioned neighbors and workers at the silk mill, but no one could provide a shred of evidence validating Frank's jealousy. If Gertrude Chiffin had even been unfaithful-- however unlikely-- it was a secret she took to her grave. 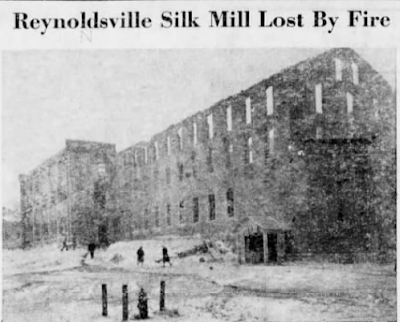 In September of 1929, six months after the Reynoldsville tragedy, the stock market crash sent the nation spiraling into the Great Depression, and the Reynoldsville silk mill was forced to lay off dozens of workers and reduce its operations to one shift. The murder and suicide of Gertrude and Frank Chiffin was soon forgotten, as residents of this tiny industrial town were forced to cope with rising levels of unemployment and poverty. In October of 1932, the Reynoldsville Silk Fabrics Corporation announced that the mill would recall sixty of its workers, but the celebration was short-lived; in 1937, the mill was purchased by the Guarantee Silk Company, only to be gutted by fire in 1942. The building was purchased by the Brockway Macaroni & Supply Company the following year, and continued to operate until 1956.