A Sea Monster in Milton 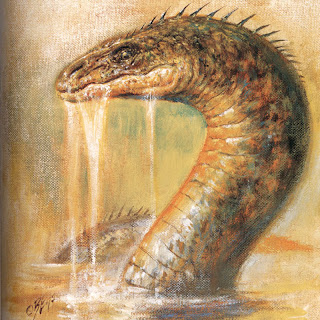 As an avid runner as well as a resident of Milton, my evening jog takes me down Golf Course Road to Route 405, down Front Street, across Locust, and back to Golf Course Road- a course that's 5 kilometers right on the button.  At two points along this course I pass Muddy Run, a tiny stream which meanders through Wynding Brook Country Club and empties into the Susquehanna, near the site of Fort Boone.

During many a moonlight run I've stopped at the bridge over Muddy Run to stretch, and on a few occasions I've been startled by loud splashes in the creek.  Whether the splashing is caused by a fish or a beaver or some other creature is hard to say.

Then I came across a peculiar newspaper article from 1878 in which it is claimed that a local man, while fishing in Muddy Run, encountered a "sea monster" with a head as big as a horse.  Although I haven't been able to find any other reports of sea monsters in the Milton area, my evening jogs are now a little more interesting.


THE SEA SERPENT OR ONE OF HIS PROGENY IN MUDDY RUN

On Wednesday, Lawrence P. Shutt, of this place, having nothing better to do, concluded to take a quiet fish in the mill dam at Kemerer's Mill, about two miles above Milton.  Accordingly he armed himself with rod and line and proceeded to the objective point.

He commenced fishing early in the morning and had continued until ten o'clock, with indifferent success, when all at once a huge monster rose partially out of the water about fifteen feet in front of him, displaying a head as large as that of a horse and having a mouth at least a foot and a half across.  To say that Mr. Shutt was astonished but faintly expresses his emotion.

He was nearly paralyzed for a moment and during that time the monster turned and lashing the water into a foam for rods around, darted into the middle of the dam and disappeared.  Mr. Shutt called loudly upon Mr. Irwin and Mr. Bruch, both of whom were near, but before they could reach the spot the monster had disappeared, and all further search for him proved unavailing.

Mr. Shutt is a truthful man, and there is no reason to doubt that the statement he makes is true in every particular.  He says he knows the animal was there and he believes it is still in the dam and, as poor as he is, he avers that he would give five dollars toward capturing it, that he might know what it was that proved such an astonisher to him and created such a commotion in the ordinary peaceful waters of Kemerer's Dam.