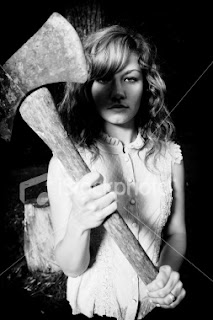 On the South Side of Pittsburgh in July of 1891, Mrs. Mimmer struck her eight month old baby on the head with a hatchet.  While this crime may seem unbelievable, wait until you read about the reason for her deplorable actions.  From the July 6, 1891 edition of the Shenandoah Evening Herald:

Pittsburg, July 6.- Mrs. Mary Mimmer, of the South Side, while laboring under an attack of religious insanity, attempted to kill her eight-month-old babe by hitting it on the head with a hatchet.  The baby's cries attracted the attention of a woman who lives in the same house and who prevented her from finishing her deadly work.  Mrs. Mimmer says her child was a second Christ, and it was her duty to kill it.  The baby cannot live.  Mrs. Mimmer was placed under arrest.